Welcome to the Hymei region, where Pokémon never have to get hurt!

That's right! In the Hymei region, Pokémon don't use violence to hurt each other!
Fight alongside your Pokémon in Love Battles: battles in which Pokémon show love
and kindness in order to befriend each other! Yaaaaaaaaay!

Explore Hymei! (there are actually only 3 accessible towns, but those 3 towns are pretty neat)
Meet Marianne, your new friend... but could you be more than friends?
Meet Bruce, the school bully, who you must compete with to win Marianne's love!

And that's not all!
Go to school, complete daily jobs, and make money, all with your Pokémon pal!

It's all peace, love, and happiness in the Hymei region... or is it?​

Pokémon is owned by:
The Pokémon Company
Nintendo
Affiliated with Game Freak
​

This is the first game I've ever made, so be gentle with the criticism (but also like... feedback is much appreciated).
There might also be some typos and bugs here and there, but I probably won't fix them, because I only made this game for the Game Jam.
(but if they are like... REALLY bad, maybe I will fix them)

Also, I suck at making music (especially battle music) so... but if you like my music for some reason, you can either steal the songs
from the Audio folder or force me to upload them to Soundcloud. It's your call.

I had trouble when I was compressing the game. Unfortunately, I wasn't able to encrypt the files, because when I did that,
all of the Pokemon, item, move, ability, and area names would not show up. (probably a v19.1 bug?). Anyways, I did not encrypt
the files when I compressed the game.

Also, there is a bug where if you use Flame Rider/Surf from the party menu with your following Pokemon, the player can surf on the land.

If you are curious about the development timeline, here it is:

what am i catching

Hey there! I just finished your game, and I thought it was really good for a first game! Here are my notes:

Aesthetics and Audio:
-Even though you used the default tileset, I quite liked the mapping of this game! My favourite maps would probably be the starting town and Paradise. However, I didn't really like the forest because it felt quite tedious to go through the maze!
-The music you created for the game was amazing! I could hear a constant motif throughout the game, so it was memorable! OH and the distorted music was a really nice touch!

Gameplay:
-The gameplay isn't very exciting, but I enjoyed the job minigames! Sure, they were simple, but it definitely made the gameplay a little bit more interesting.

Writing:
-The writing was definitely the best part of Pokémon Paradise! I LOVED the dialogue at the start of the game, and I had such a great time interacting with everything and getting these references and clichés. The humour was a little wacky, but I liked it!
-The concept of Love Battles is hilarious, it's so smart, and I died laughing when Marianne was explaining the rules.

-I didn't expect the sudden dark turn in the middle of the story, and for some reason, I also did not expect that twist in the end! (I was wondering where Marianne was this whole time. How did I not see it coming?? Lmao).
-The story was really good, I loved the world-building you did with the books and NPCs, and I especially liked the dialogue between Milay and Bruce!

Other: You don't need to encrypt your game! Apparently, it worsens the performance of the game and yeah it doesn't really work for v19 anyway.

Overall, it was a well-written story! There's not much gameplay, but I'm not too bothered about it because this game was more story-focused! Great job with this!

I honestly regret that it took me this long to get to this game. I had a great time playing it! It was nicely written and made me laugh several times. This was a really great game!


I could only really find one typo. 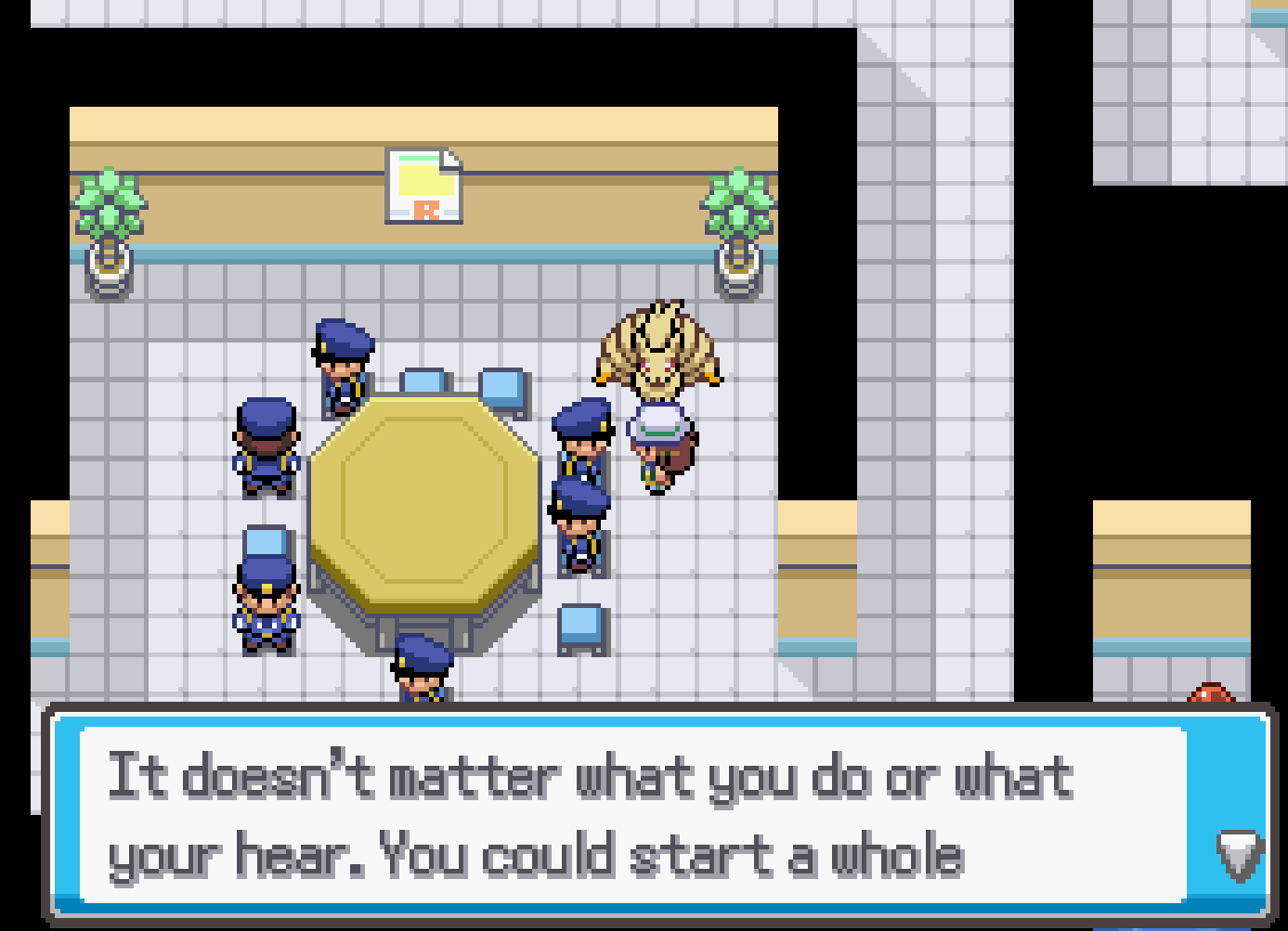 I feel like "your" was supposed to be "you"?

I heard Cade and Kenny talk about this game, and it honestly didn't disappoint! I'm not here to write a big review (like I've done with other Jam games). Sorry, school is busy. But yeah, I loved this game! It was really funny, the maps were pretty well made, and the music was awesome! Great job altogether!
I like working on fangames and stuff I guess... Nah I love it, it's great!

You put the "two trains" question in your game, instant 12/10
Sample Signature Text

Praise:
Overall, I really enjoyed this game. I think my favorite part about it is the flavor text. It's everywhere, and most of it is hilarious. You definitely built up an aesthetic that fit this game really well. I also really enjoyed the story, too. The seamless shift at the halfway point in the game is completely out of the blue but done super well, and the characters helped make a lot of the moments in this game memorable. Finally, I also want to praise the music, as I really like what you did with recycling the base of a few themes and changing up some of the background instruments. It made the game flow well.

Feedback:
My main issue with this game is the ending theme. I felt like after you beat the antagonist, there is too many caps used and the antagonist also doesn't get the chance to defend themselves before getting taken away. It just feels kinda sloppy and rushed. The only other nitpick that I had was that my Pokemon didn't gain experience. It probably made the balancing easier, but especially in this game I feel like the Pokemon should grow alongside the trainer.
As I said, I really liked this game. I hope to see more from you in the future!
YouTube | Twitch | Twitter
Pokémon False Order | Hunter & Raymond
Pokémon the Ancient Leaves | Brownsville
Pokémon Outburst​

it say i need a opengl with 2.0 graphics card but i dont have that and there are others like me out there there to poor to get a proper graphics card to play the game please fix it so everyone can play thank you

Nixie_TheDragon said:
it say i need a opengl with 2.0 graphics card but i dont have that and there are others like me out there there to poor to get a proper graphics card to play the game please fix it so everyone can play thank you
Click to expand...

I don't know how to do that. I'm not a programmer or artist or anything.

Also, I used the default graphics that come with Pokemon Essentials, so if there is a graphics error, it is probably on their end or RPG Maker's. The only graphics I made were some item sprites and some tileset edits. The only other thing I can think of that could cause it would be the Following Pokemon EX plugin. So all in all, I have no control.

—i believe in piplup supremacy—

Nixie_TheDragon said:
it say i need a opengl with 2.0 graphics card but i dont have that and there are others like me out there there to poor to get a proper graphics card to play the game please fix it so everyone can play thank you
Click to expand...

Ok, upon further research, it appears that mkxp requires OpenGL 2.0 to work.

mkxp comes with Pokemon Essentials v19.1, so it's not anything that I did. mkxp has to do with the programming side, which I do not know anything about, but it appears that most newer games that are made on these newer versions of Essentials are going to be made using mkxp, which requires OpenGL 2.0 unfortunately.

Unfortunately, I do not know anything about programming, especially not the Ruby programming language, so I really do not know how to deal with mkxp or RGSS, so I am unable to fix the game.

—i believe in piplup supremacy—
L

Hey, does anyone know or can explain where the batteries are? I keep pressing enter and every single patch of grass where the item finder says one is buried but can't find any.

LeoWolfish said:
Hey, does anyone know or can explain where the batteries are? I keep pressing enter and every single patch of grass where the item finder says one is buried but can't find any.
Click to expand...

But, if you still can't find the batteries, here are the locations:

—i believe in piplup supremacy—
L

But, if you still can't find the batteries, here are the locations:

Thank you. To be honest I used the item finder, saw that it said there was an item near by, didn't notice my character turn so proceeded to move one tile and spam the enter button over the entire area. I was sat there for two hours.