This project has a release available. The full version is still a work in progress.
Pokemon: The Giant Torterra

Stranded in the middle of the sea, our protagonists find a colossal Torterra! But things don't look so good for its survival, what in the world can possess any threat to such a large creature? Find out in Pokemon: The Giant Torterra! 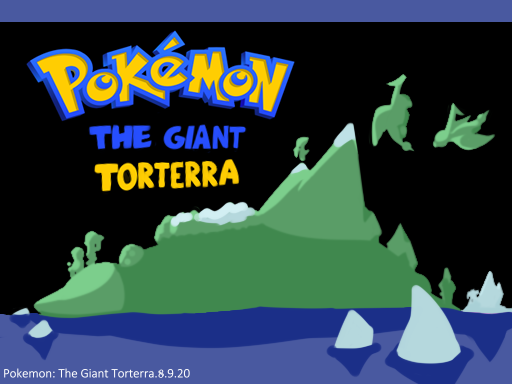 Notes-
You have running shoes from the start.
The shiny rate is increased to about 1%.
Ice resists any type it is super effective against.

I haven’t played the game at all but just through the screenshots I can tell it’s an amazing game.
YouTube Pokémon Ends​

I'm very interested in this due to the drawn artstyle. I'll be sure to check this out soon.
Check out my YouTube Channel:
https://youtube.com/channel/UC8oqV00PYRduLLgQ7Y0GGiA

Finished playing through this game and I thought I'd leave my thoughts.

It is a very cute game, from the art style to the characters. Right off the bat I liked the character section screen. The intro itself was very cute at well. Just everything in this game is cute, the interactions, and chatot, I loved chatot.

I enjoyed playing the game a lot, it was just a nice short experience, I did encounter some bugs but I let you know about them. I quite liked the ending "quest" if you will. The mechanic about the cave was fun and unique. I think early on some of the route could have used more forced grass as I was able to skip nearly all of it.

But yeah it was fun! and cute! Keep up the good work!

What game u made nice is the region india

Hey I just finished your game and I enjoyed it! The art style is incredible and so unique. The writing was funny and interesting (loved chatot). Good work!
My Twitter
Discord: KennyC#3093

He roll. :]​
To sum up, there were a few areas that needed polish, but I overall enjoyed the game! I loved the concept of exploring a giant Torterra. The island had a very mysterious feel to it, one that I wish we got to learn more about. The exchanges with Chatot were great, and I liked how you incorporated in themes of Pokémon - Human cooperation. Especially because the protags were rangers. The art style was also a refreshing visual change. The overworld Pokémon animations you included made the world feel far more alive. Great job!

-Fixed Issues related to Cave.
-Added Icons for Fairy type.
-Added minor interaction with the partner.
-Added more repels from the beginning.
-Added Heal spots in maps in forms of wild sleeping Chanseys.
-Removed The presence of void in a few places

Hi I played this, nice game. Its very impressive all the art that went into it. The dialogue was funny between the characters (especially Chatot). Here's a bunch of random thoughts on the game:
Chatot was funny and that flying animation on to your head is very nice. Having a bit of a different take on a dark cave puzzle was cool. I kind of wish there was a cave music theme. Also running up and down the mountain to get the wood was a little tedious. I wish I could have picked up wood earlier. Or maybe add some ledges to hop down the mountain quickly. Other than that there were some typos and maybe some dialogue that could have worded better. But I understood what was going on still, it wasn't confusing. There was a Lum Berry that you didn't walk over to obtain on the mountain (didn't matter at all but maybe fix it for consistency/polish). I ended up not using any of the items I picked up, except the Leftovers and one Pecha Berry. Maybe if you collected berries to feed to the Torterra of some pokemon in need (like when you feed Miltanks Oran Berries in the original games) that could have made item collecting more useful. I thought the boss battles actually had a good level of difficulty, I never lost but I had some Pokemon faint. I liked the little detail of the Wailord's eyes changing to angry and then normal after the battle. Overall can't complain about the art style, its really cool to see something different like this. And of course saving the giant Torterra and getting that big thank you from it was great.
So yeah, thank you for making this game, great job.

this reminds me of Mists of Pandaria, where upon playing a Pandaren, as you start off on an island sized tortoise.

really cool to see something like that being played with in Pokemon, just adds that bit of flavor that makes the whole universe pop.

Hihi! I beat your game! Here's my review!


Disclaimer: my opinion and personal playthrough as an individual player blah blah

Obvious grammar issues you already know about, which I know couldn't be helped. I hope it wasn't too difficult to find a person to clean up dialogue, as I know recruitments tend to land flat. The dialogue that was read however wasn't bad! As was mentioned above, Chatot was pretty memorable, and I think I would've liked Chatot becoming more than a translator and possible a more interactable role? Thinking how he could've perched up at the top of the campsite to guide the player and do other things. I think it was also more than just a grammar issue as well, I feel like a lot of sentences could've been cleaned up and executed better as well, and perhaps more interesting cutscenes and movement rather than characters throwing text at each other. Not to mention, some battles kind of happened out of nowhere and a lot of the flavor text and cutscenes felt rushed (WHICH I TOTALLY UNDERSTAND BTW). I also think there was a lot of blank walking space, and I would have appreciated a few more optional landmarks and events. Maybe there's a burrow in one the bigger Torterra trees for example that leads to an optional dungeon?

The reason why I say this is because I actually really love the vibe of this game. The entire game radiates an unbelievable cuteness that I actually really really love, and that's not me just talking about the artstyle alone. I sort of actually liked the characters and who and what they did and are as well as the general vibe of the game. I picked the white haired character and really really liked the detail of borrowing the other person's Pokémon for the adventure, and how they basically now take point. I think this could've been expanded upon and went into more specifics on what each character was and making them more distinct from each other. I couldn't really gauge a personality out of either of them, y'know? I know you mentioned maybe a sentence for each just saying what they did, but it could've been a bit deeper. I'm not asking for an exposition dump though, just a bit more lore I guess!

Gameplay wise, there's actually something quite interesting about picking a team of 5 (as the Pokeballs all seem to have 100% chance of catching, which is a good thing), and then using those to tackle the rest of the game's challenges. The game was much less about training and grinding a team and more of picking one, so people are still having the satisfaction of conquering a battle and that's really cool and it doesn't get annoying! I think I would have preferred a more in-depth game design phase. While the Pokemon selection was good, some Pokemon had a hard time doing anything interesting (Scizor). Perhaps next time look into movesets and learnsets? You can always edit movesets and what Pokémon can do and you could sprinkle in stuff like debuffs and status effects in the wild Pokémon sets to help with bosses, really give the player a lot of cool things to play with rather than a ball of stats + typing for bosses. This also gives you an excuse to give more interesting items and stuff (everything past the Life Orb seemed to be just berries).

Adding to my gameplay critiques, I think there could've been clarity on the objectives. For example, the first time I went into the cave, when I was told to cut down trees for wood I wasn't sure *which* ones I was supposed to be cutting, and I was pressing A on the long wooden pieces rather than the small mini trees, which I thought were decorations. It wasn't obvious which wood chunks were decorations and which ones were objectives. I circled up and down the mountain maybe twice before figuring out the skinny trees were my objectives. Not only that, it didn't tell me how many I needed, until I figured out that there was no limit to how many I needed. For clarity's sake, something like "Our wood is our light source. Grab as many wood as we can, as in the cave, each wood piece will deplete one by one until we run out." or something like that, but add some of the character into it lol. This is important because without that information, people would either learn that they need more wood after running out early, or keep farming for too long because there's no indicator on how much wood is needed.

Overall, I think the thing I think it needs the most is a big paint of polish on everything. Even looking at the book by its cover, there's a lot genuinely charming things about this game and imo it's not solely carried by the artstyle. This was a really unique Jam title and I really liked a lot of things about it. Really great work building this game and it's setting.
Gardevoir's a Shadow type
The game didn't heal my Pokemon after the Beartic fight, leaving me down a mon for the Scyther fight