Expand the Empire! Join our Discord. Invite friends if it doesn't suck. It's the best place to ask questions, chat about the game, and give feedback.
You can also explore our dev team's guides and resources and be the first to see and discuss new features as we complete them for future releases.
https://discord.gg/Ntj8zqh


What is right and wrong? How do we address war, racism, education, politics, good and evil, and the human nature itself? And who gets to decide? Welcome to the Telius region, only months removed from a bloody civil war sparked by King Tobias II. A once benevolent man who ruled through the guidance of many noble families, he ushered in an era of prosperity and industry. But eventually he plunged the region into division and violence and in the end was overthrown by his own people. Amidst the ensuing turmoil, a new oligarchy of representatives has seized power, supported by the revolutionaries that overthrew the king's regime. This "Council" is now overseeing the reconstruction of the region and establishing a new Pokémon league of hand-picked leaders that oversee the various towns and cities of Telius. But even under this supposed new stability, old fissures remain. Many Telian citizens are resistant to change, harbor old grudges, and don't trust this new league and how it seeks to reshape their daily lives. Many remain loyal to the longstanding traditions of the old nobility. This nobility and their soldiers, now on the outside looking in, has adopted the moniker 'Team Royale'. Operating from the shadows and seeking to help Telian citizens on an individual level, they are intent on restoring the region to its former glory days under a better king. So with the region weary and divided, how will Telius move into the future? Enter YOU the player: the child of a noble family, you were sent away before the war began. Now that the war has ended, you, along with your best friend Alanah, return to Telius to fulfill a promise to conquer this new Pokémon league and help bring Telius into harmony and stability once more. Can you solve the mysteries of the war, work your way through the shadows of the past, and become champion of the Telius League? Will you support the Council, fight for the Royale Loyalists, or take matters into your own hands? How will you define your legacy in Pokémon Empire?

There are too many examples to list, but to name a few of many that you will see in Empire:
Freeze now halves Sp. ATK and has a 25% chance fully freeze
Aqua Ring heals your entire team, even after switching out
Astonish works like Fake Out
Defog only clears hazards if it successfully lowers EVA

Pokemon Rebalanced:
Every Pokemon has a niche that distinguishes itself from its competitors (like all the route 1 birds or regional fish Pokemon). There are meaningful tradeoffs in stats, typings, movepools, and abilities between similar species. Do you go with Onix's massively buffed base stats or Geodude's vastly superior movepool? Does your team need speed control and healing from Furret, parting shot and super fang support from Watchog, or raw power and bulk from A. Raticate?
There are tons of new ways to use old favorites, but all changes are designed to buff the Pokemon at every stage of your playthrough in ways that support their lore, theme, and aesthetic. Pokemon gain and change typings, moves, and abilities only when it helps them in meaningful, lore-friendly ways. Voltorb is now Normal/Electric because not only does it help it carve out a more unique niche among other Electric-types, but it also gains rapid spin (a move it should've always had) and STAB on its self-destruct moves. Again, only changes that are balanced and enhance its gameplay fantasy in a lore-friendly way.

Fakemon:
Only a few fakemon species will be added each episode. These are all specifically and carefully designed to fill unused or underused type combinations OR to fill specific niches that currently don't exist (such as Pokemon to make weather teams more interesting, or a physical attacking Ice/Ghost-type drain tank).
Our Team:

Special Thanks to
WSGreen (mapping, spriting)
Ty (spriting, recolors)
Night Fighter (coding, special features)
Swamp King (spriting quality assurance)
Giantsparrowbee (spriting)
and everyone else who's spent time with us in our discord server 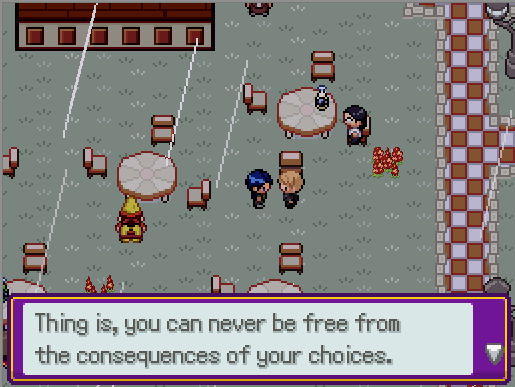 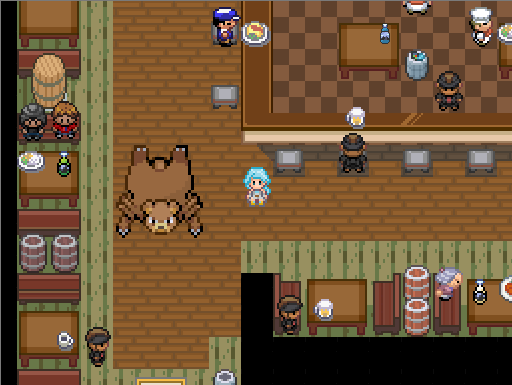 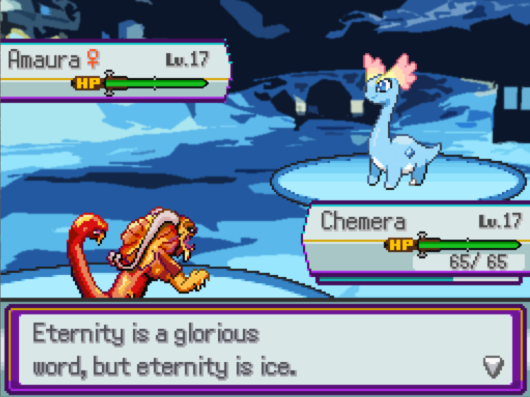 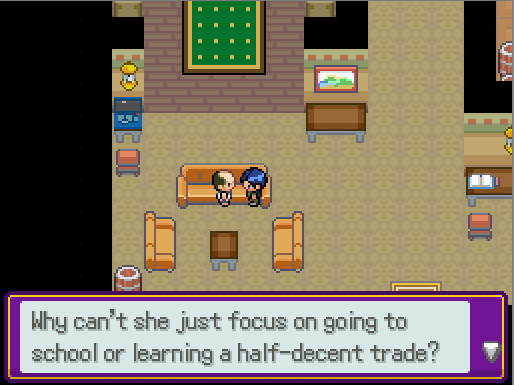 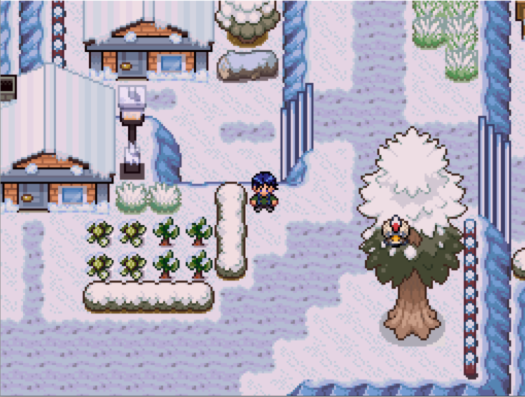 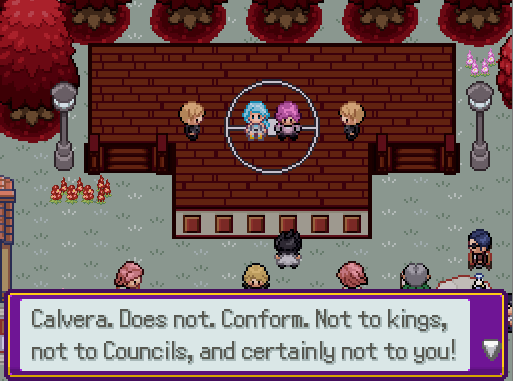 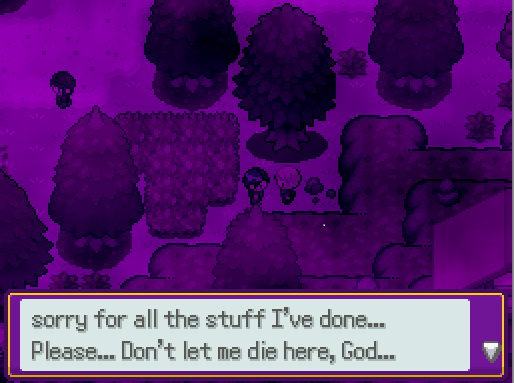 this game looks epic. i give it a try. soon
T

It looks like some of the screenshots don't have the fonts installed while the other ones do.

Shifted trainer experience more linearly: Trainers to the North and West of Polaris are more consistently stronger than trainers to the South and East (except for a notable, well-loved trainer or two)

Reduced grind (not that it was a problem, but it's even smoother now)

And I'm sure there's probably more in there, but that's all that I remember. More than likely the last patch before Ep2, so please stop finding bugs, thanks. Enjoy.

Changelog:
Patched a bug that caused a crash near the Mountain entrance
Changed some NPC dialogue to better explain new gameplay features
Added a bunch of new crafting items
Handful of cosmetic improvements
Further refined some trainers and enemy teams
Refined some of the starters' base stats
Buffed some of the underperforming available Pokemon, such as Pidgey, Cubchoo, and Jigglypuff
Added brand new features to Goldeen, Grimer, Jangmo-o, Hoothoot, Patrat, Snover, Charjabug, and Clamperl
Last edited: May 1, 2020

"In the red again this month..? That's a shame. Does your family know what's going to happen to them now?"

"Listen. I could help you fix this. Mend some old bridges, keep things off the books, and still let your 'family' here continue... their current lifestyle.
Hm? What do you think? Should we continue this chat somewhere a little more... Discreet?"

patch 2.3 is now live! It's a mini-update, so we're keeping it exclusive for our discord members only!

we added some new post-episode 2 content back in Polaris:
check out the new explorer's guild mission!


The rest of episode 3 is in continued development! But for now, enjoy!

"Something's come up. In Illyria. Do NOT check in at the outpost. Here, this is your assignment. We've been keeping tabs on them for some time now.

This needs to be done cleanly. Remember, the most important thing is to recover the target. Everything else is secondary. Use the asset as you see fit, but make certain there are no loose ends.

And there won't be a problem with any... personal... conflicts of interest regarding this assignment, correct?"

The tiles in Polaris are great! Where did you find them?

They're from all over the place! The Red Ex is credited for some of them (he allowed use of his Pokemon Dawn tileset awhile back), others came from reborn. Most of the tiles (outside of things like trees) have been recolored by hand. And some buildings and objects had snow added to them by me personally!
And while we certainly have our own unique aesthetic, we hope Empire's gameplay and story-telling sets us apart for you! Thanks for playing!