If you have questions about the Pixel Slam Jam, want to gush about someone's submission, have ideas about a theme, or just want to talk about an ongoing or past Jam, this is the place!

​
History of Pixel Slam Jams
​
[tabs]
[tab=#8: On the Attack! ]
Pixel Slam #7 took place March 5th - March 15th 2018.
The prompt for this jam was a Pokemon using an attack.
The winners of Pixel Slam #8 are
Clifford with Bisharp using Guillotine against Uxie, and Cilerba with Sandygast using Ancient Power. 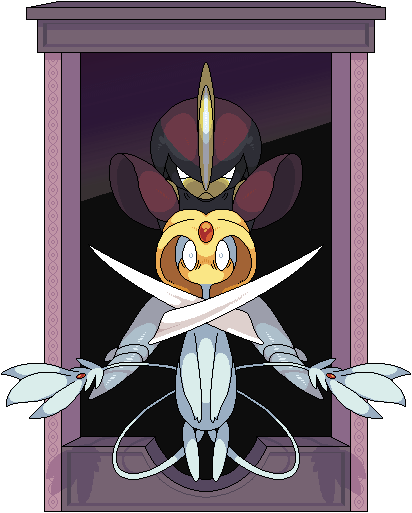 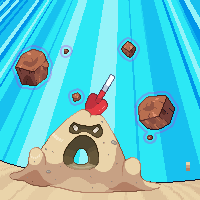 [/tab]
[tab=#7:Costumes and Disguises ]
Pixel Slam #7 took place October 21st - October 30th 2017.
The theme for this jam was to design a costume for a trainer and/or an existing Pokemon.
The winners of Pixel Slam #7 are
artcanary with a halloween friend and Tomix9tomix with a spooky Sudwoodo. 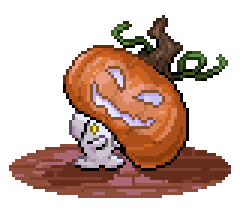 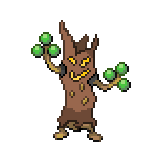 The winners of the Pixel Slam Jam #5 are Luka S.J. with Wailestial, and Hematite with Ascaleon! ​
What is the Pixel Slam Jam?
The Pixel Slam Jam is a friendly competitive event where participants create pixel art based on a theme. The submissions can be spliced sprites or scratch work, just so long as it's pixel art style! The goal of a Pixel Slam Jam Event is to give the Relic Castle Community an excuse to sprite for fun without having to worry about any kind of restrictions that come with spriting something for a game project.

After everything is submitted, the judges then give out a Pixel Slam Jam Badge to the entry/entries they feel utilized the theme best. Winners aren't chosen purely by technical skill, but also through their original design choices, and any backstory they put into their sprite; so even if you're just getting started with pixel art, we'd love to see you attempt the Slam Jam!

How to enter:​
Whenever there is a Pixel Slam Jam underway, it will have its' own thread separate from this one. Just post your submission into the active Pixel Slam Jam thread, and you'll be entered.

Congratulations to Luka and Hematite! Between Luka's graphical skills and Hematite's design skills, I knew your entries would do well!

Congrats and great job to both of you guys!!! I really loved seeing all the entries as they came in and I really enjoyed participating, can't wait for the next one! ^o^
[my art blog] [my resources]

Congratulations! You guys deserve it!

I really appreciate the compliment to the technique! <3 I was worried some parts would be hard to read (especially the red patterns), so I'm really glad you think it came out well!! And I really had a lot of fun with the design, because I'm so used to designing Megas and evolutions - I've never given thought to a Legendary form, so this was a really new challenge for me, and the idea for Ascaleon as a punishment came about from the fact that the one thing Megas and full-time evolutions can't be is worse for the Pokémon, haha - it helped push me to design something really different from my comfort zone, and I'm so happy it paid off!!

Having read the criticism, that's actually really good advice and I'll make sure to keep it in mind! The feet definitely do look a little too much like puddles, haha. The idea was just that they had circular segments, but I think the shading made them look really rounded, while I meant for them to be flat circles, not domes - I guess I was paying more attention to the lineart and didn't notice the shading affecting how the shape would be perceived! Kind of amusingly, one of the earlier concepts did have them melting into the earth, but that was scrapped and not what I was going for here! XP And the sand tail needing to be grainy makes a lot of sense! It does look a little too "clean" right now - looking at Pokémon like Hippowdon for comparison, sand usually would be represented with more dithering than well-divided segments! Thanks for pointing those out so I can keep them in mind for the future (and since a Fakemon in my game also has sand in its design, that will be very relevant when I sprite it, too)!!

Congrats to Luka, too!! Wailestial definitely also stood out to me as amazing - I love the color scheme, and the airship look is awesome!!

(I don't think I've ever won an art competition before - I'm so immeasurably excited right now and thank you so much!! >w<)

Congratulations to everyone who submitted! I really enjoyed each and every entry, and those that added lore and WIP/design info even more so!

Congrats, guys! It was awesome seeing everyone's ideas and how they went about bringing their ideas to life. Now, time to wait for the next one.

Thank you guys for the lovely new badge. In the sea of awesome pixel art, I feel incredibly honored to have been picked out for the badge. I wasn't really expecting anything major. Between the forum reboot, and everyone's contributions (and even those daily discussions over at Discord) I have to say that I feel really inspired to try and further brush up on the quality of stuff I want to post here. As a final statement; congratulations to Hematite. The sprite and the concept behind this look and sound terrific, and it is a privilege to be sharing the #5 badge with you!

Congrats to both of you!

Congrats to both! You did an amazing job and your artworks look amazing! Can't wait to see if you keep going for the next one!
Pokecommunity: https://www.pokecommunity.com/showthread.php?t=383915
Youtube: https://www.youtube.com/watch?v=BlgJd6qwwxA
Website: pokemonshiningstarshadyeclipse.weebly.com

Good job to everyone who participated. Y'all made some impressive sprites, and I enjoyed witnessing the creativity that you all demonstrated through the types of legendaries that you made.

Also, thanks to the judges for the thorough critique! I'm sure that everyone who opted into it really appreciates the thoughtful review that you put into your comments.

Pixel Slam was a blast to watch! Everyone's designs and stories were really fun to see, I'd love to encounter any of them in a fangame!

Congratulations to Luka and Hematite, you both definitely deserve it! I think you both went really outside of the box in your lore and designs, and it turned out wonderfully!

Evan said:
Does the special battle mode need to exist in canon pokemon games?
Click to expand...
It'd make things a hecka less confusing for anyone looking at your submission if it was something from canon...
But if you want to it'd probably be alright to use your own style if it's explained thoroughly.

Aah, wow, congratulations to all of the winners!!! I definitely agree - all of the entries are amazingly well done! I couldn't make a Trainer sprite if my life depended on it, haha; these all look fantastic and, fangames aside, wouldn't even look out of place in an official game!!

(I also think it's really nice that you chose several winners despite the low number of entries - they were all so high quality that I couldn't pick just one, and I'm glad you decided to reward everyone for that even though there weren't as many entries as last time, because it really was deserved and earned by all of the winners! C: )

The Magician of Oddities

(and thats pretty much the summary of me logging in and noticing the badge, congratz to @pedrohjv @AceTrainerGresh @Makattack202 and @kirlial too, thats a long list of winners but personally I liked way too much all the sprites in this jam)

Here in our beautiful communist society, everyone's a winner!
and i have a shiny new badge which means less fangames I have to play in order to get that neat custom bar thingy

Nah really though, everyone's sprites were great. It's understandable that it was hard to pick a winner. Though I'll admit I especially liked @Alaguesia's sprite. The theme and the general spriting was impressive, though that isn't to discredit anyone else's.
I do stuff sometimes.
I made Edge Rising

Wow, I was not expecting to actually get the badge.
Congratulations everyone! All the designs were fantastic! ^ᴗ^

Based on everyone's favorite emoji. Attempted a Lillipup as an Ewok and that crashed and burned, so I looked up other dumb/weird halloween costumes and stumbled upon this idea. I'll accept critique, as well.
Click to expand...
"help i'm literally being eaten alive by this mass of poop"

oh jeez thank you so much??? *A* i was not expecting that at all!

great job to everyone who entered, too, i really loved seeing them come in!! (especially zubatman!! that one was so cute! i'd love to see a pokestar studios film about him.)
[my art blog] [my resources]