Your favorite Porygon (technically Porygon-Z, but nobody's pointed that out yet) is back, this time with his own game! You may recognize him from last year's Game Jam 3, in the sadly cancelled Pokémon Revenant - yet the rest of the game doesn't hold a candle to this fellow here. Everyone wants this - even if they don't know it yet, thanks to my shoving him down everyone's throats for a year most prized creation just getting the recognition he deserves this is what my life has come to please help
You likely know Space Porygon for his fares through cyberspace. This is the tale of how he came to such a role. This game comes off the ending of Pokémon Mystery Dungeon: Explorers of Time, Darkness, and Sky. As far as Porygon knows, the world is about to end. Thus, he sets out on a quest to find a new universe he can call home. Will you find a haven? Or will you wander forever?

Made with Pokémon Essentials on RPG Maker XP. ​
Download!
The latest version of Space Porygon is 1.0.4a
You can dowload the 1.0.4 build here.
If you fell victim to the softlock on the Phoenix Tower pillars, please also download this file and paste it into your game folder. Hit New Game to regain your progress.

Team!
Just me. I’m lonely. Porygon was a nice friend, I guess.

Resource Pack!
If, for whatever reason, you think this game is actually visually appealing, then check out the resource pack! As a fair warning, a lot of sprites are missing frames that would have gone unused (for example, some characters do not have sprites for facing left, because they never face left). But here it is!
Space Porygon Resource Pack
Last edited: Aug 17, 2018

Hey! So I tried playing the game, and it didn't really work. I came across lots of issues, small ones and game breaking ones. I'll detail my adventure below: 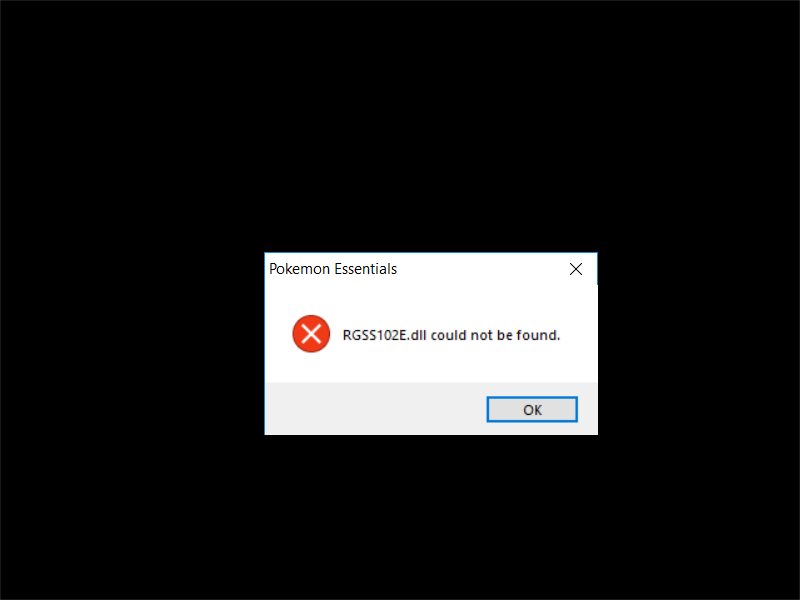 So first thing first, upon opening the game, this appeared, it wouldn't let me start. But I took initiative and grabbed those files it was asking for from a clean version of essentials and it worked! 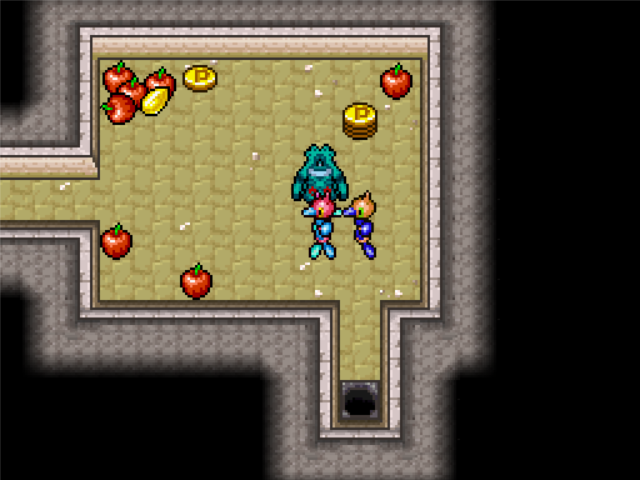 This is a small one, but you can actually walk through this porygon! 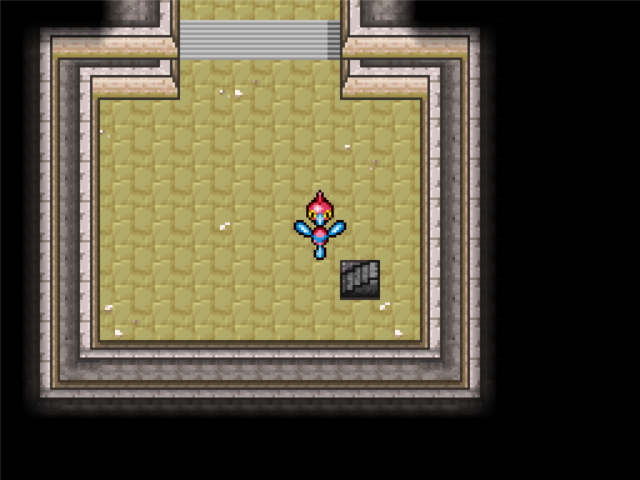 these stairs in the area where you get teleported down from don't actually go anywhere, they just take you back to the same map. 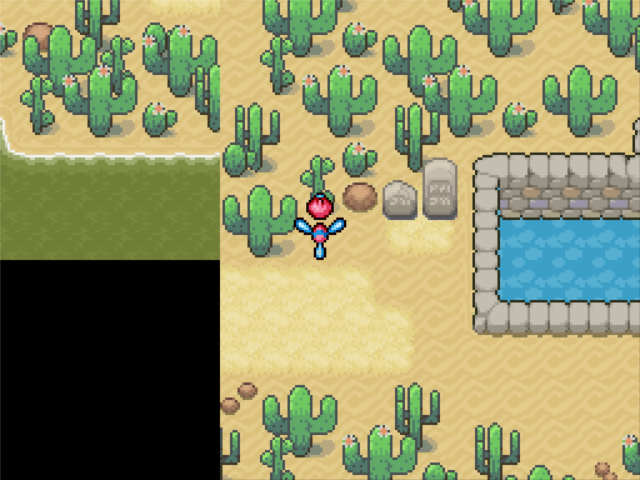 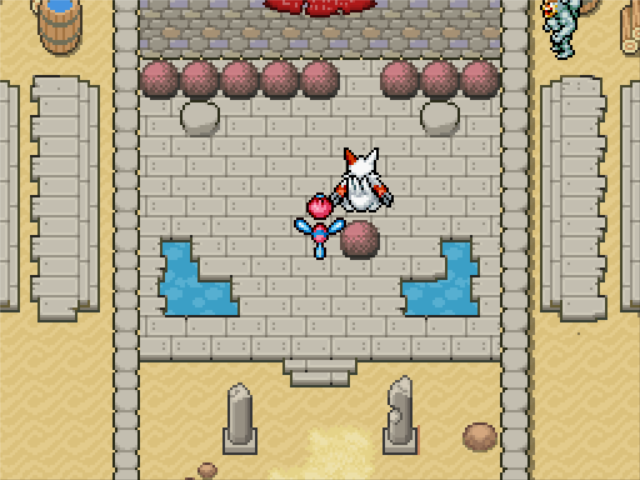 So with this boss, this boss had some trouble working for me. The first time the fight ran nearly smoothly, but he accidently hit himself with one of his boulders, causing the whole fight to just stop as shown above. when I tried talking to him I lost the fight. Problem is, upon starting the fight again after losing, it doesn't start, and the game just freezes in the state shown below: 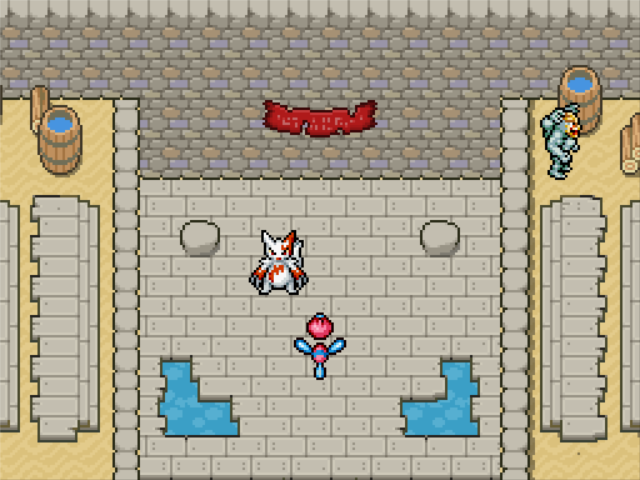 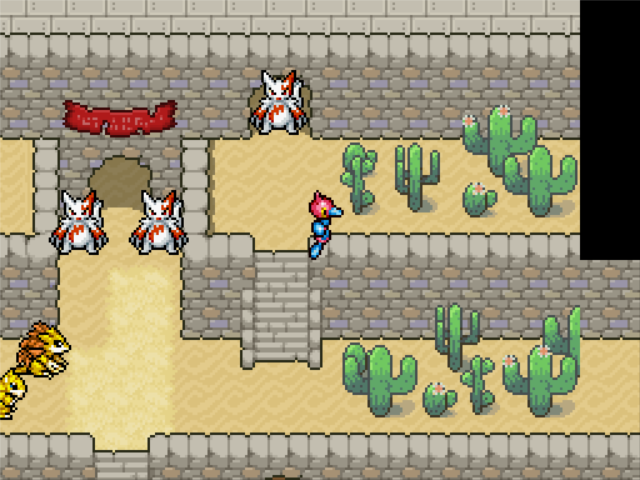 and one last small one, this might have to do with me messing with the map connections, but you can actually see off the map which isn't good.
Also none of the pokemon in the town are interactable which is odd, they all have nothing to say, they just stand there.
At this point i figured I'd be better off waiting for a patch to fix it up, I didn't really want to mess with your boss fight.
All that said, I know you really struggled to get something out, and while it isn't in a working state YET, I think you should be proud. I didn't get to play much of the game, but the boss fight seemed like a really cool idea! I've never seen anything like that in a pokemon fan game before, it has me excited for what is to come later in the game. Anyway, I hope this report isn't too discouraging, I look forward to being able to play it, it looks promising!!!!

This is a hotfix that fixes the bugs with Zangoose's fight and rebalances it.

Download!
To play 1.0.1c, PLEASE download the patch here and paste it into your Space Porygon folder. It contains the files that need to be changed. Overwrite when prompted to.

@Zeak6464 has brought to my attention that the download links were a bit broken. They should work now. Thank you.

Hi! I've been playing your entry (latest version with the patch files in it) and I really love the music choices + the aesthetic of the maps so far. The cyberspace tileset is especially pretty. However, I've run into a couple of game-breaking bugs:

1. At the end of the Zangoose fight, you can move away from the three boulders as they are closing in. As a result of that, when you try to back away in the following cutscene, you may not be able to complete the move route, and get softlocked as a result of that. (Which is what happened to me.)

2. After the fight, the scene where you go to the portal and talk to Machamp does not end. My guess is you forgot to turn on a self switch or the correct self switch, so I runs endlessly.

The creativity that went into the Zangoose fight was very impressive to me- I bet the amount of time that must have gone into eventing it was probably nuts- even if it still needs some ironing out. I'm really liking your entry thus far, so I hope you'll get the chance to upload a quick patch for this to allow the player to continue! I really want to see what other interesting ideas you have come up with for your entry.

Space Porygon - Update 1.0.2a
This should be the last major bugfix update for now - there shouldn't be any more softlocks or game-breaking glitches. Hopefully.

As this is a numbered patch (1.0.2) as opposed to a lettered patch (1.0.1d), you will need to redownload the game in its entirety.
You can find a download link here.

1.0.2d - The "I'm an Incompetent Fart" Update
The creator of this game apparently never removes her debug stuff. It's a good thing that's not me or anything...
Yikes.

Fixed a bug that literally starts you at the final boss.
I don't even have words for this one.

This is a lettered patch, so extract the files and paste them into your already existing Space Porygon folder. It does not contain the entire game - just the files that need to be replaced or added.
Download
Last edited: Aug 15, 2018

ANOTHER FREAKIN' UPDATE LET'S DO THIS - 1.0.3a
If we're lucky, this is the last update before 1.1, which actually will add content and not just be me fixing my own incompetence.

This is a lettered update, so you will need to download the game again in it's entirety.
Download here.
If you fell victim to the softlock on the Phoenix Tower pillars, please also download this file and paste it into your game folder. Hit New Game to regain your progress.

1.0.4 - The Definitive (Probably) Edition
This is the ultimate edition of Space Porygon up to now. Or, more likely, for the next 12 hours until we find another softlock.

This is a lettered update, so you will need to download the game again in it's entirety.
You can find it here.

I really like this game, it's very different from a typical fan game and I have to give kudos for what you have. My biggest complaint is probably that there isn't more of it, and that the fight with Zangoose is probably a bit tricky for a first fight, but that's definitely something that I've seen you talk about tweaking.

But as for what's actually in the game, it's quite good. Your dialogue writing is also particularly strong which can sometimes take a bit of a backseat in jam entries. Well done. I'll definitely be looking forward to playing future updates of this.
You must log in or register to reply here.
Top