Can you manage your way through the perils of playing with tiny little colored squares?
This is the Pixel Slam Jam! Relic Castle's pixel contest that happens... whenever!

Welcome to the most haunting Pixel Slam Jam yet... imagine the cutest Pokémon you can, but get it all spooked up for Halloween!

Awww, this Cubone is an adorable killer! Is its nickname Jason?

​
About this event:
The Pixel Slam Jam is a friendly competitive event where participants create pixel art based on a theme. Submissions can be spliced sprites or scratch work, and do not have to fit the standards/limitations of Essentials or RMXP. If you have made something prior that happens to fit the current theme please do not submit it here; our goal with this event is to provide a fun exercise for our members. There is a special time window where submissions are accepted, and when that ends the judges take a short time after to collectively decide who to award and write up any critiques.

Is this Pixel Slam Jam not for you? Check out some of these links:

Why Do People Call Me A GOAT 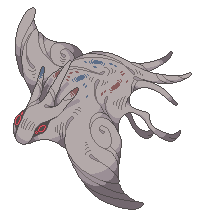 Wow! Was not expecting to see freaky redesigns but I'm here for it

Why Do People Call Me A GOAT

It's Halloween night, and all the stay-at-home trainers have dressed up their front doors for the special occasion. And of course, they've dressed up the -
(Wait, where are they? I can't submit this for the jam - how did I manage to lose all eight?)

Cubone has gotten over the death of their mother, and equipped with a new helmet is now out for vengeance!​

I honestly just really wanted to draw a Pumpkin/Jack o' Lantern, and thought it'd be fun to make a pumpkin-headed Pokémon. The only cute "helmet-wearing" Pokémon I could find was Cubone and Eiscue (?), but seeing as I haven't played Sword/Shield and wasn't familiar with the Pokémon (apparently it has another form?) I ended up going with Cubone

The sprite was originally created with the normal Cubone pallette, but I thought as an extra, that I would give it a couple of more "spooky" color variants just for fun.

I saw this as an opportunity to finally start practicing pixel art (and technically drawing too) creatures instead of just making tiles. I wanted to get in as much different practice as possible so I - admittedly - might've tried to make it a liiittle too hard for me from the get-go by doing dynamic poses, no overhauling existing sprites, non-flat 3D objects with the Pumpkin, keep the image essentials sized etc. all at once. However, I feel like I managed to get some good practice in a lot of areas, so I don't regret it too much. So thanks for finally giving me the inspiration to get started

P.S. The sprites were so small (52x36) that they ended up blurry when rescaled through the BBCode editor, so I've attached both the normal-sized sprites if for any reasons someone wants those.