Can you handle the cutthroat and perilous trials set forth by the judges?
This is IRON MAPPER: Relic Castle's mapping competition!

Trial 2. End Boss Location
Deadline: Sunday, November 21st 2021
SEASON 6 DISCUSSION THREAD​
Iron Mapper
Iron Mapper is a mapping competition on Relic Castle. Each mapping competition, otherwise known as a "trial", will have a deadline clearly stated, and you will have this time to complete and submit a map according to the theme and criteria of the trial. Once all submitted maps are judged after the deadline (this depends on the volume of entries, usually a few days), the judges will post the results, and prepare for the next trial.

All the lovely nature of trial 1, chilling out in Verdanturf Town was the calm before the storm that is trial 2 of Iron Mapper season 6, as we are going from the probably most relaxed place in the Pokémon universe to the least relaxed one.


The challenge: Your entire journey lead up to this point. This one fight that will be happening in just a few moments will decide the fate of the world you are living in. Will you be the hero or will everything end right here?

Your job is to make the map that this fight is happening on. Will it be taking place on a volcano, above the clouds, inside a lab, an arena or maybe just some plains. It’s your call. The only thing that matters is that the most important fight of all times is going to take place right there.


Have an epic time mapping!

The following criteria must be met:


Your judge for this trial is:
@aiyinsi


A tip from the judge:
"The way a location is presented is at least as impactful as the location itself."

Critique Requested:
Yes, give me all the critique you got!

Credits:
Essentials Default Tileset
Zeo254
And some minor edits by me

Notes:
Out of all the place you can meet in, its a calm one.​

"Sh*t is about to go down"
Critique Requested: Forcing the judge to write back for this masterpiece of a map? YES.

Credits: Seiyouh for the tiles

Notes: I would love to lore dump here, but I don't need that. Let this powerful image speak for itself.
Also the shadow is basically a third layer, not a fog.​
Last edited: Nov 6, 2021 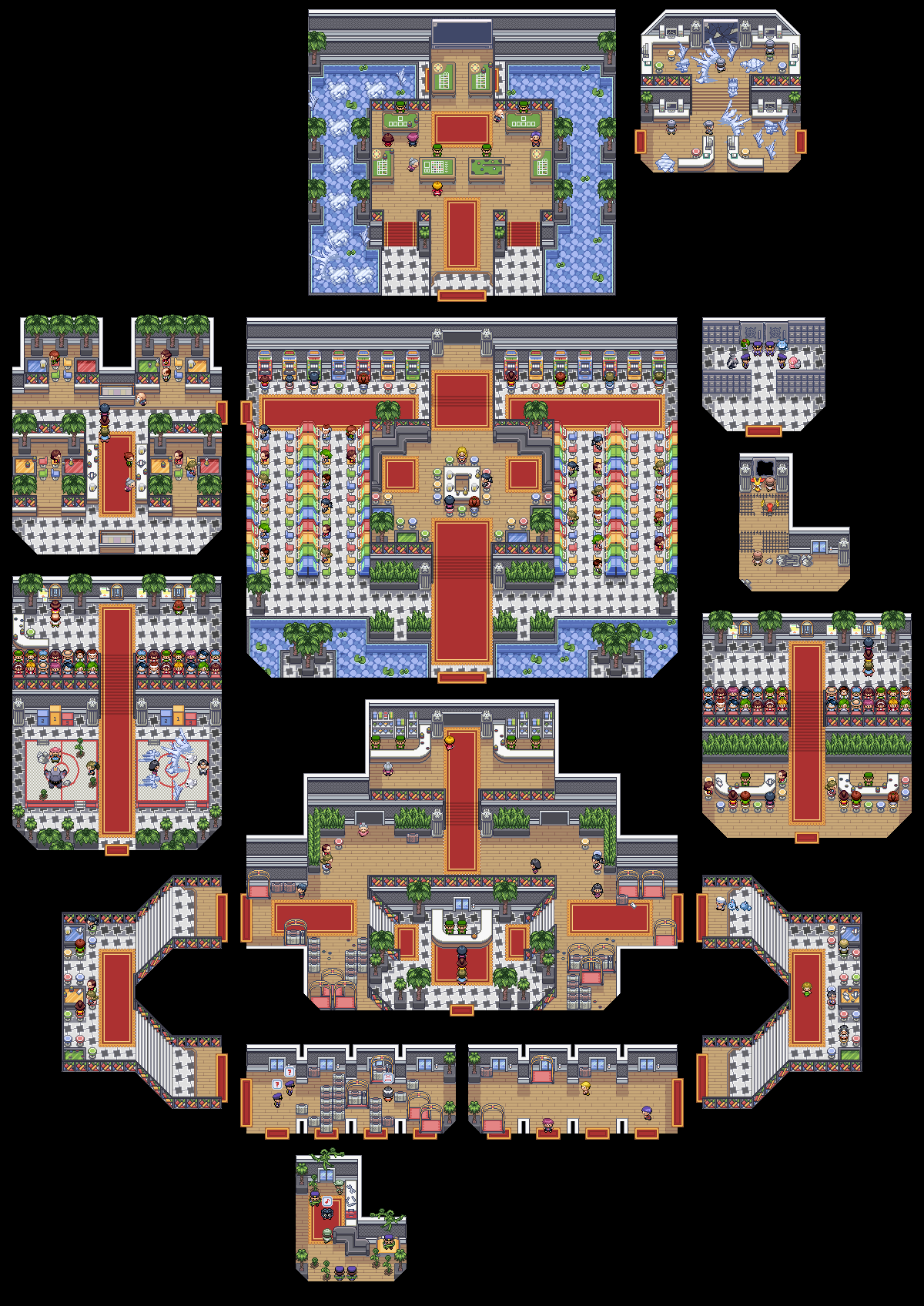 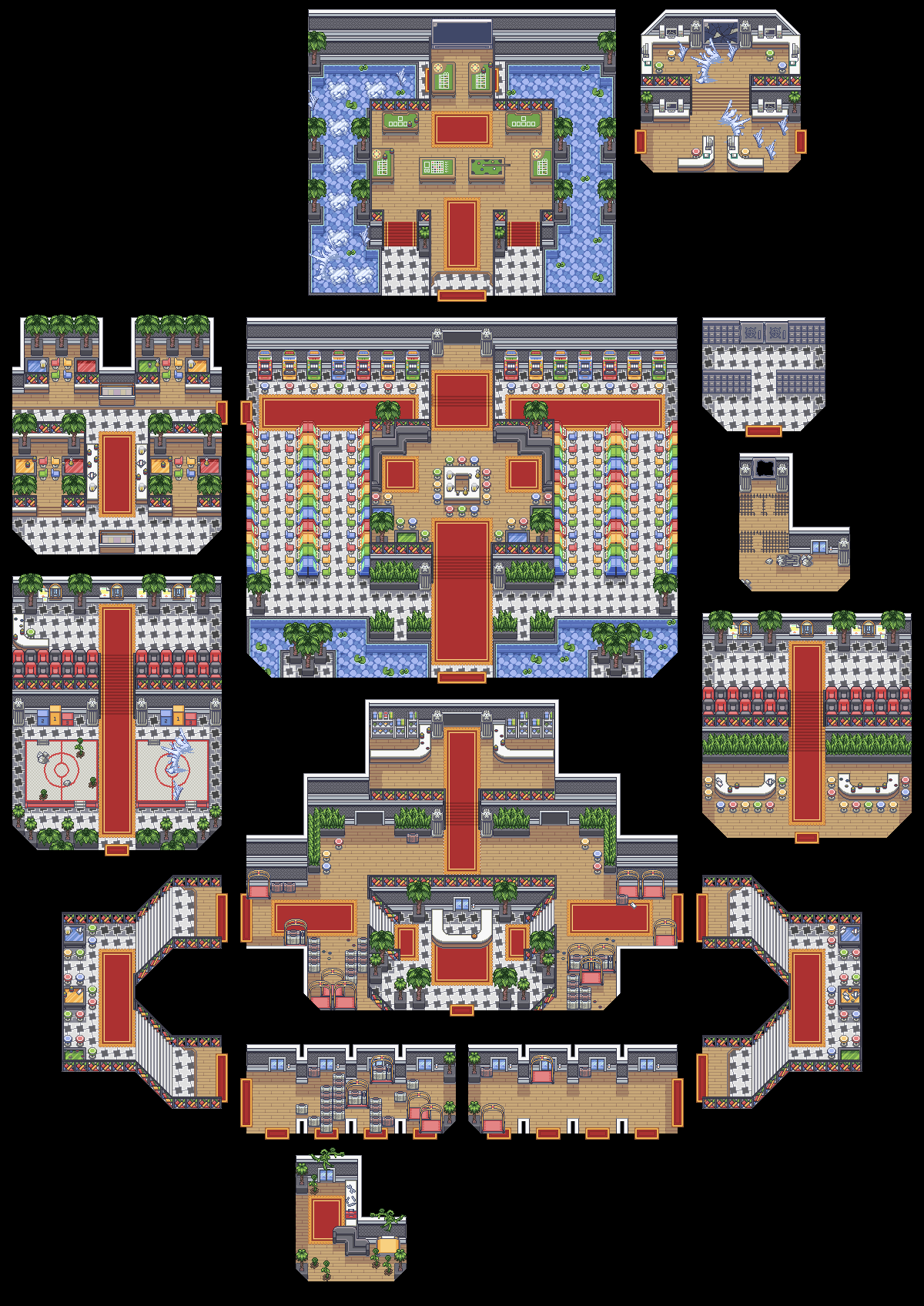 Overworld Credits
Ekat
Aveontrainer
Poffin Case
Guille
null
Clara
Princess Phoenix
Lunar Dusk
Notes: A group of thieves have coordinated a heist at the local Game Corner. Green Team has neutralized their targets with a combination of grass-types and suitcases. Blue Team has infiltrated the security room. Red Team has broken through the last few layers of security to reach the main vaults. But, there's still one final challenge awaiting them if they want to get away with their crime. 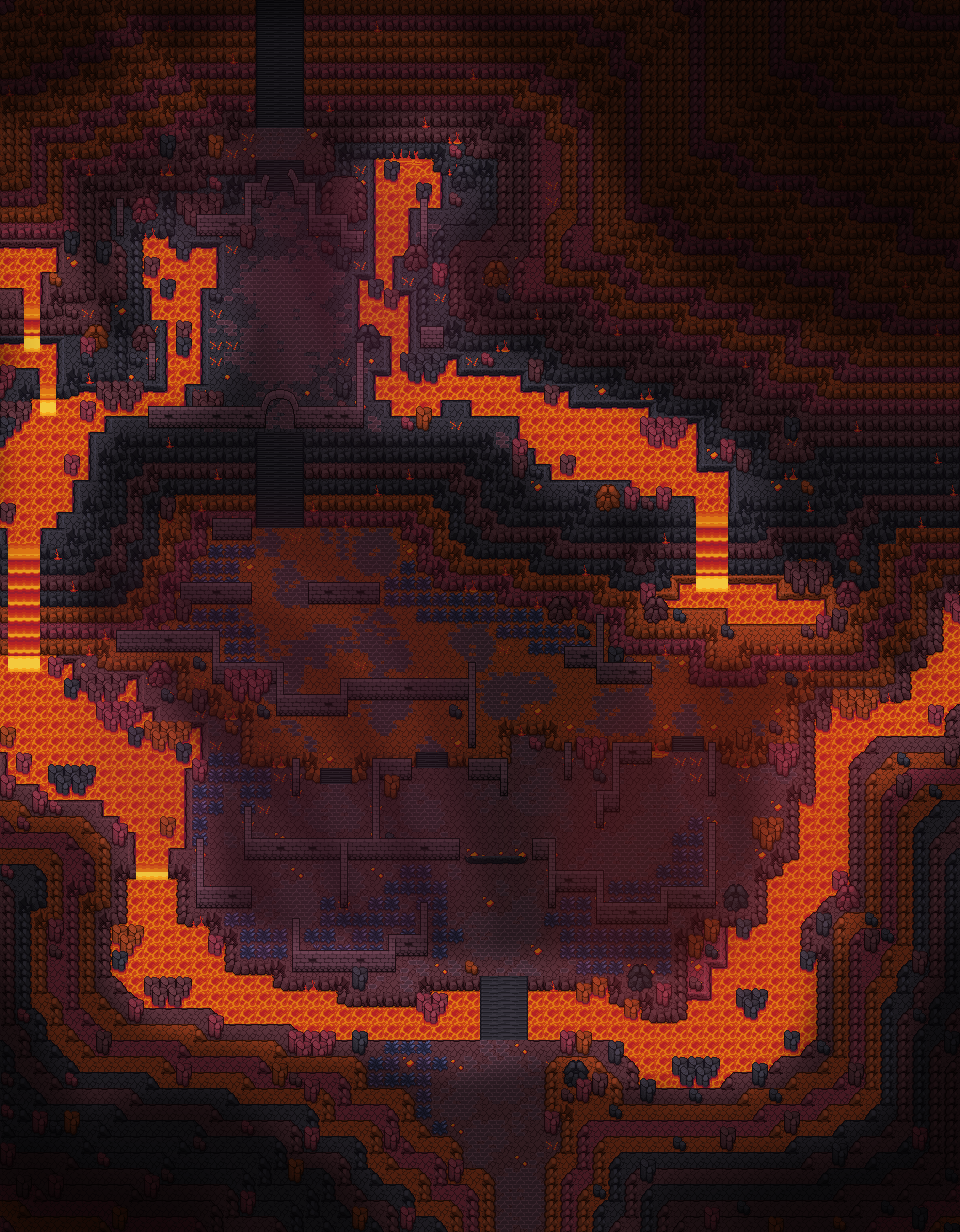 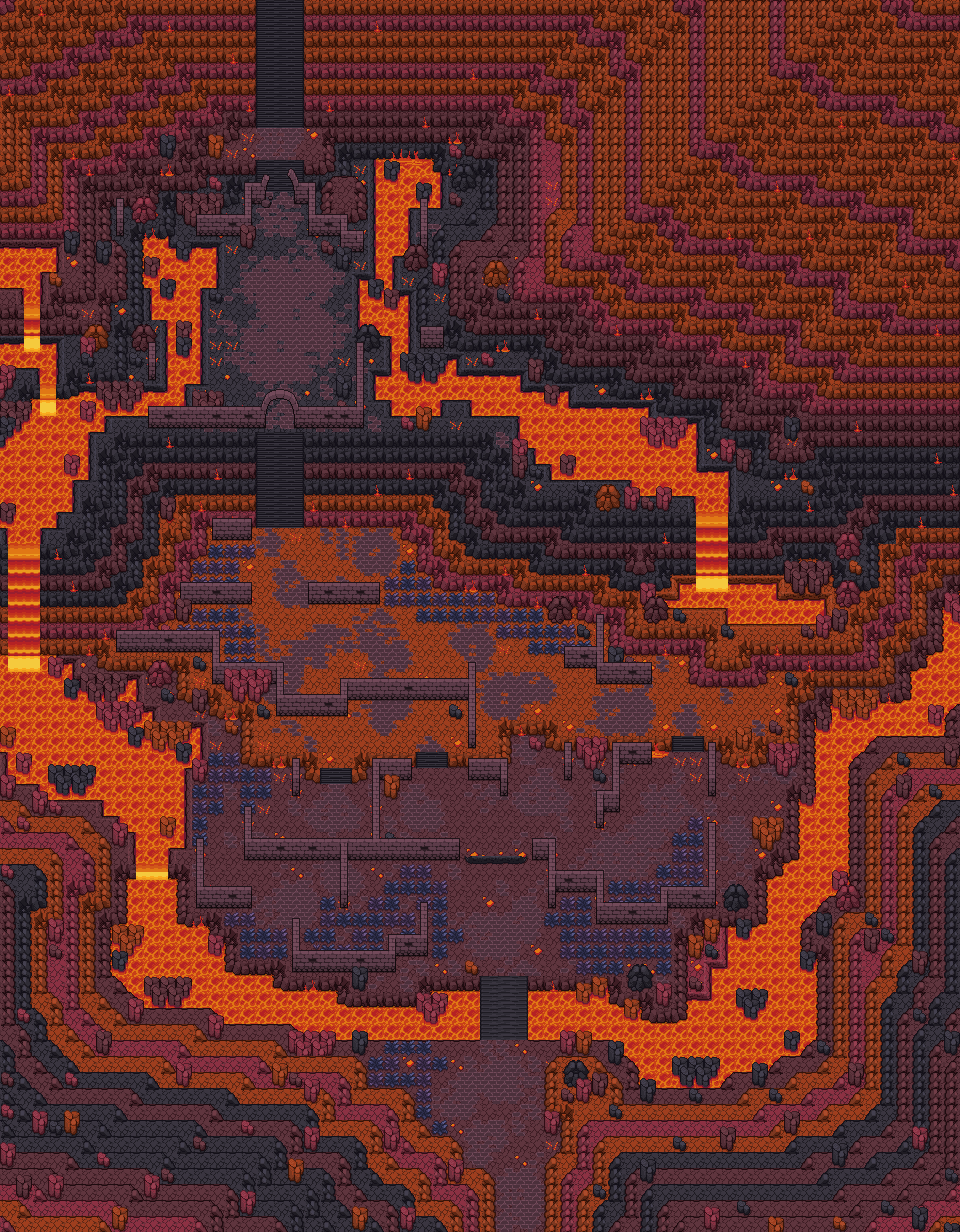 Volcano Tiles by Ekat99 on DeviantArt

Arida Tileset by Emeiry on DeviantArt

Notes:
Decided to step out of my comfort zone a bit and use some Gen 3 tiles! I had a blast mapping this, and making the lighting! I hope it makes for a pretty unique end-boss fight!


Notes: i kinda had to step it up didn't i

i was a bit iffy about participating on this trial because i don't like making maps that i can't use on my games; so i'd basically be spoiling the endgame location of one of them. this was a pretty fun trial though, and this is mot likely my most ambitious map so far

EDIT: i forgot to mention that the pots are breakable with rock smash!
Last edited: Nov 12, 2021
A

Notes: After a grueling trek up the mountain, you have finally made it to the impact site, but somebody else has found it first. It looks like you still have one more fight ahead of you. "It looks like a sphere or an egg with the coloration of... What would Archie want with Deoxys???"


Credits: Tileset by Akizakura16, though the terrible chair was edited by me.

Notes: You come to me, on the day that my granddaughter is to be crowned Pokemon Champion, to ask me for a battle?
I'll admit I got caught up in other things this month and didn't really have time to do what I had originally planned, but I think this turned out okay all things considered.

Thank you for participating. The results will be out in a few days.

Thank you everyone for participating. The number of participants this time was lower than usual, but that was honstely anticipated. All the more I'm happy that you managed to pass this trial!

This one was a more challenging trial. Mostly because we do way more normal routes and cities than boss fight locations. They have very different reqirements and the results showed that with some pretty unique maps.

@MegaMew47's map manages to impressively keep the balance of giving room to explore at the beginning of the route and slowly making the route more linear with less distractions from the final boss fight that is about to happen.

Congratulations on your well deserved badge!

I'm looking for a writer to help me realize the idea I have for trial 3. Please contact me per PM or Discord(leilou#5723) for more information if you are interested in helping out. I don't want to post too much here to not spoil the challenge.

I'm also always looking for fellow mappers that are willing to help me out in judging. Getting more input from a more diverse pool is always better.

Notes, fogs, NPCs and tiles are not being judged. I might still have left feedback on those if I felt that I had some.

Nice use of the hill to make the house feel more impactful. The effet would have been more drasitc if the hill was higher.

Putting the sign below the hill or had a tile in front of the sign would have made it so the player can stand in front of it.

The bushes might have looked better if they were either slowly introduced or more symmetrically placed so they look planted.

Due to the way the tall grass is layed out and how wide the area in front of the house is, the area feels very route like with lots of distractions in from of wild Pokémon and exploration, distracting the player from the focus of the final boss.

Most epic map ever. You would have gotten the badge, but the badge is not worthy of this masterpiece.

For real though:
The lighting effect was very well used. The eye is drawn to the blank wall(brightest spot) behind the swimmer though. So either having a gradient or putting some darker decoration there would have helped.

The symmetry of this room is also great in general. Some pieces draw the players exe above(diagonal walls and furniture) and sime below(lighting shape) the swimmer.

This map is gorgeous.

I like how the map is structured into multiple stages. Maybe make the later stages longer than the ones before to achieve a more dramatic buildup effect.

The symmetry is good. Having a mirrored version of the pink trees that is poinnting towards the road on the right side would have enhanced the importance of the road even more.

The map has an exceptional buildup. With the many exploration opportunities at the beginning slowly dying down and ending in a staircase towards the last arena.

The map is very detailed. I love how you mixed in the brick floor tiles to tie the map together and make it look more interesting at the same time.

Use different ground tiles on the non walkable parts vs the walkable ones. Your fog and the way you map alliviate the problem of the player not knowing where they can go or not a lot. But changing up the tiles used in non walkable path will still improve this.

The snakelike pathing has the advantage to allowing more (backtracking) shortcuts. A ledge more or two could have helped here.

The fog does a great job with mood. By lighting up the places with lava drips a bit (not as much as the lave lake) you could have enhanced those tiles even further.

Thank you for creating those tiles. I will use them so much. (you could totally use this as post game map if you don’t want it to be the end boss btw)

If you combine the two small cave maps into one, you have more space to play with intersting shapes like you did with the other caves. The player also doesn't have to reorientate as often.

The route is very long with little new challenges. Maybe throw in a puzzle instead of a "timewaste" roadblock like rocksmash or rock climb.

There are many places for exploration in the route part, but none at the boss part which is great for build up. The part at the temple could have been a bit longer for a more dramatic effect though.

There are many backtracks. A few of them are very punishing though because they are hard to get back to if you jump off the ledge by accident. A strength setup for example would have been less punishing there.

Use a different ground tile for places that the player cannot walk on. It makes helps with guiding the the players view, which in general you want on the walkable parts of the map.

Thinning out the trees and making them small as the mountain gets higher is a nice detail. Being a bit more aggressive with the changes would have helped getting that point across to the player even better.

The part in between the two ladders is a lot less detailed than the rest of the map, making it stand out.

You missed the chance to block off a few exploration places with the rangers vs aqua fights. That way the player would have been more focused on the urgent task and the map would have opened up for exploration once the crisis is dealt with.

The map is simple but effective.

The symmmetry of the room is good, drawing attention to the desk.