Can you handle the cutthroat and perilous trials set forth by the judges?
This is IRON MAPPER: Relic Castle's mapping competition!

Trial 1. Ominosity
Deadline: Sunday, October 18th
SEASON 5 DISCUSSION THREAD
​
Iron Mapper
Iron Mapper is a mapping competition on Relic Castle. Each mapping competition, otherwise known as a "trial", will have a deadline clearly stated, and you will have this time to complete and submit a map according to the theme and criteria of the trial. Once all submitted maps are judged after the deadline (this depends on the volume of entries, usually a few days), the judges will post the results, and prepare for the next trial.

We're kicking season 5 off by staying to the spooky Halloween theme with ominosity. A haunted forest or mansion? An abandoned city? Your goal is to create an haunted, foreboding, scary or otherwise ominous environment. How you do that is up to your own imagination and interpretation!


The following criteria must be met:

Your judges for this trial are:
@Marin
@VanillaSunshine


A tip from the judges:
"Remember that "ominous" doesn't have to mean traditional spooky themes! What other things give you an "ominous" vibe?" 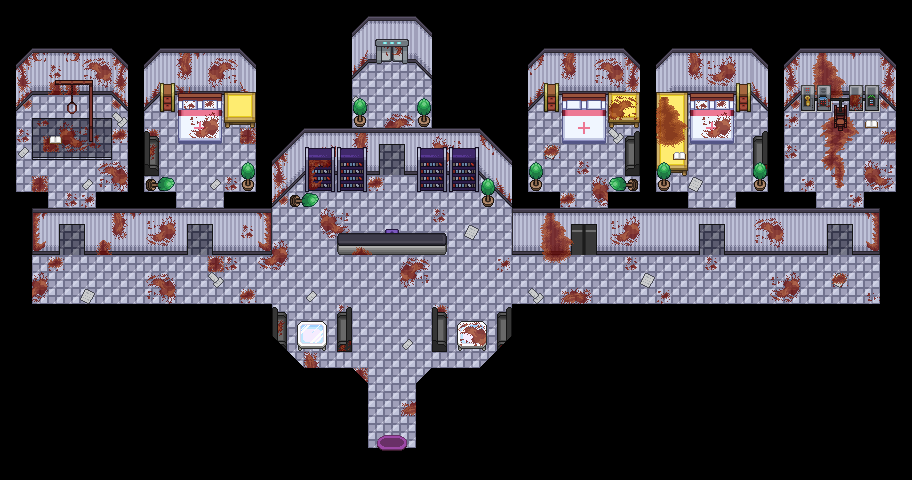 Credits: I made major edits of tiles here, in addition to some of my own. Paper tiles by Princess-Phoenix. Should be it. 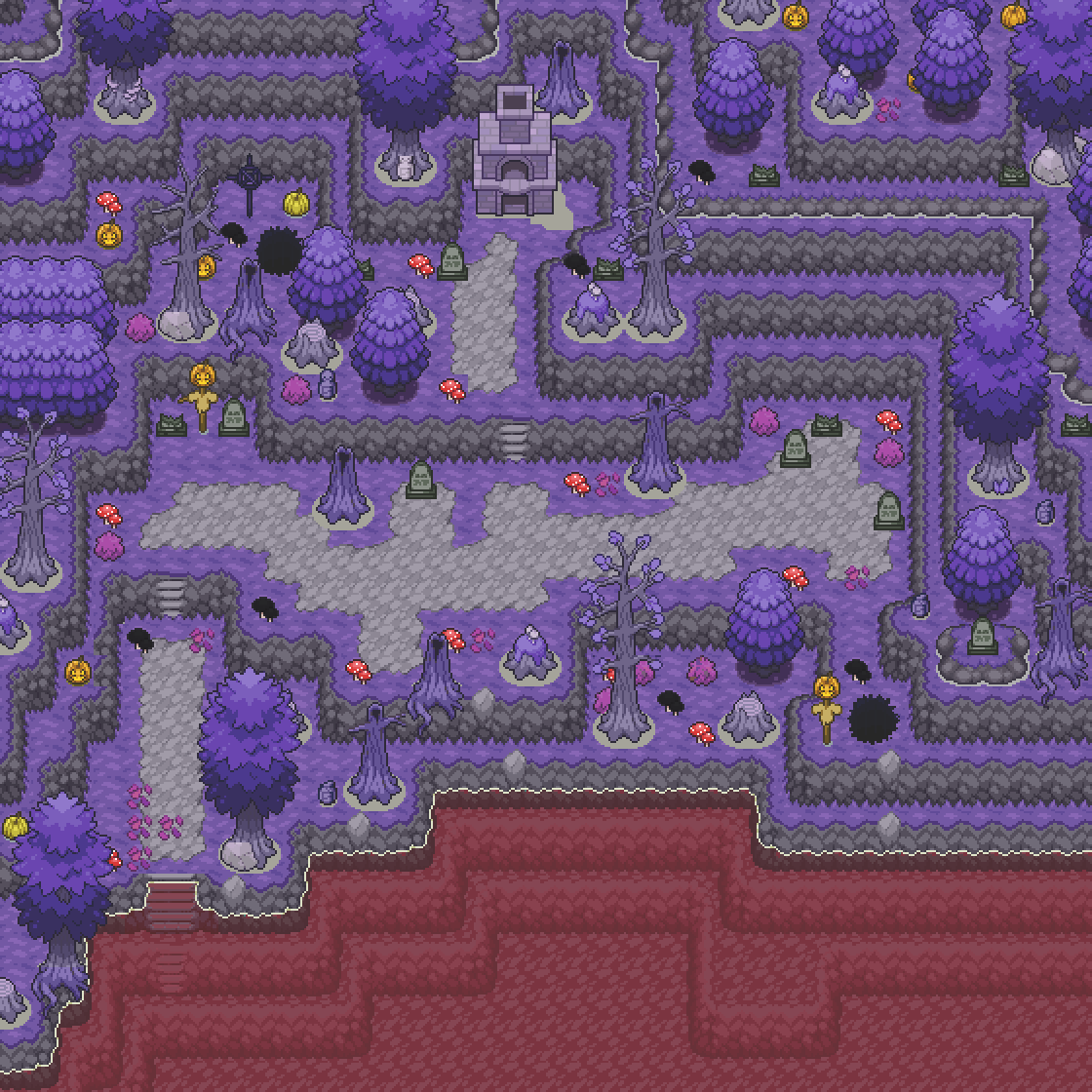 Credits: Magiscarf for most of the tiles and Pokemon Reborn Team for the graves / cross tiles also the hole things

Notes: 3 am mapping gg
also seeing how weird the tileset is put together whoops 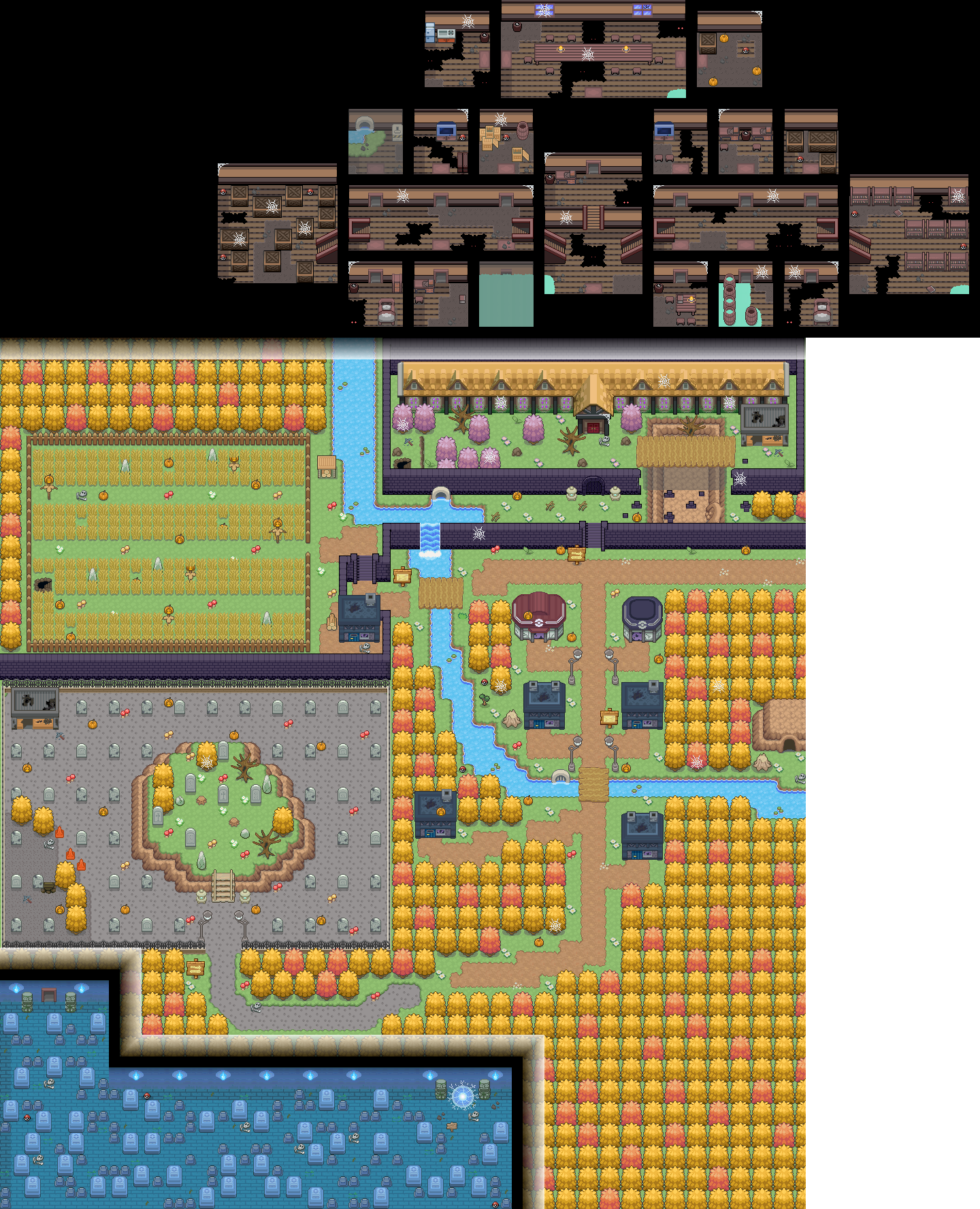 Credits: Reborn Team for the overall tileset, mlogan for the basketball court image, and werebat for the cars and police car. I made the fence edit to allow for traversable paths.

Notes: Paying homage to Silent Hill the best I can. 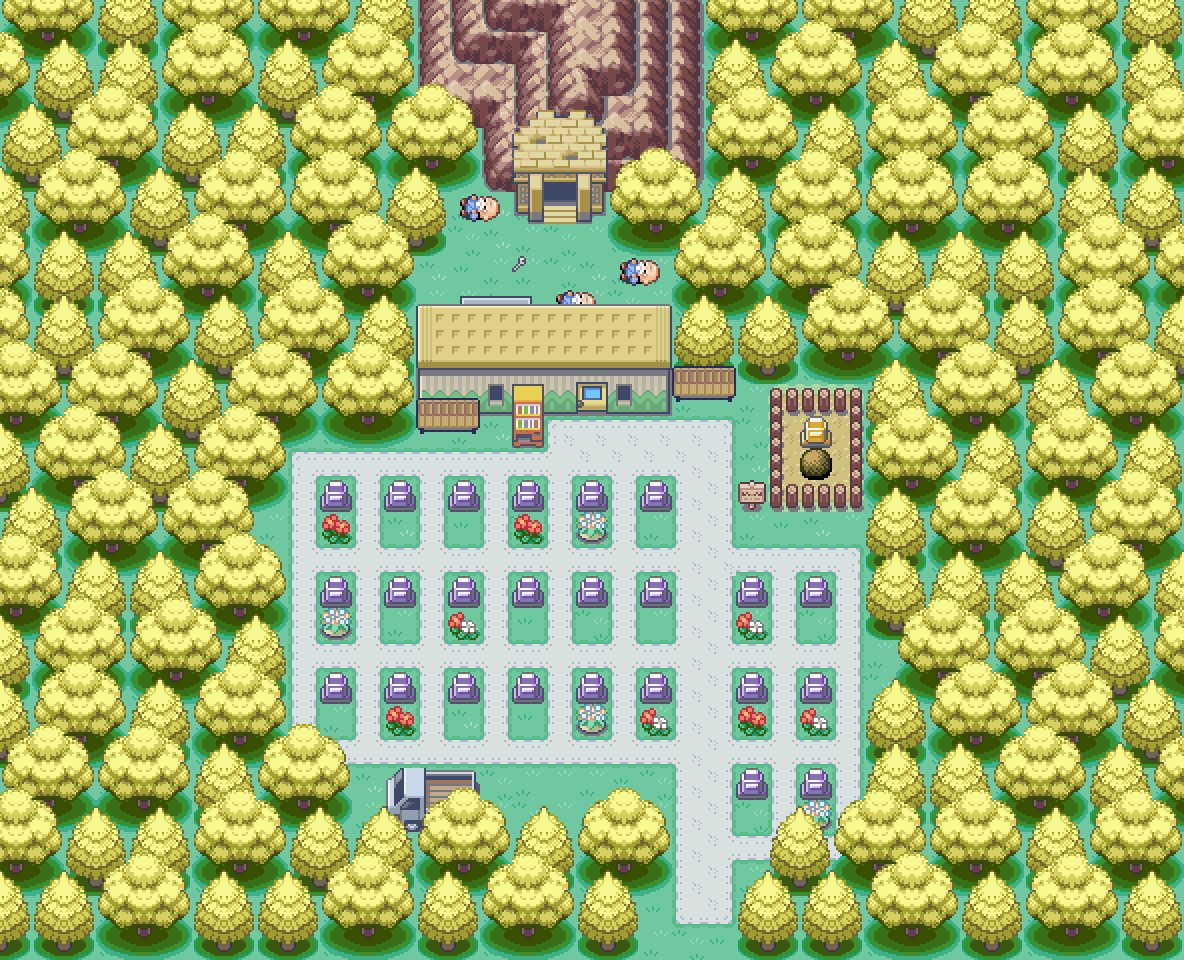 Notes: I wanted to see how much I could do just with default tilesets. Had to do a bit of a recolor for the skinny tree and added wrench as well as the old man. The old man would normally be an npc but he was important to the overall feel to be left out of the screenshot. 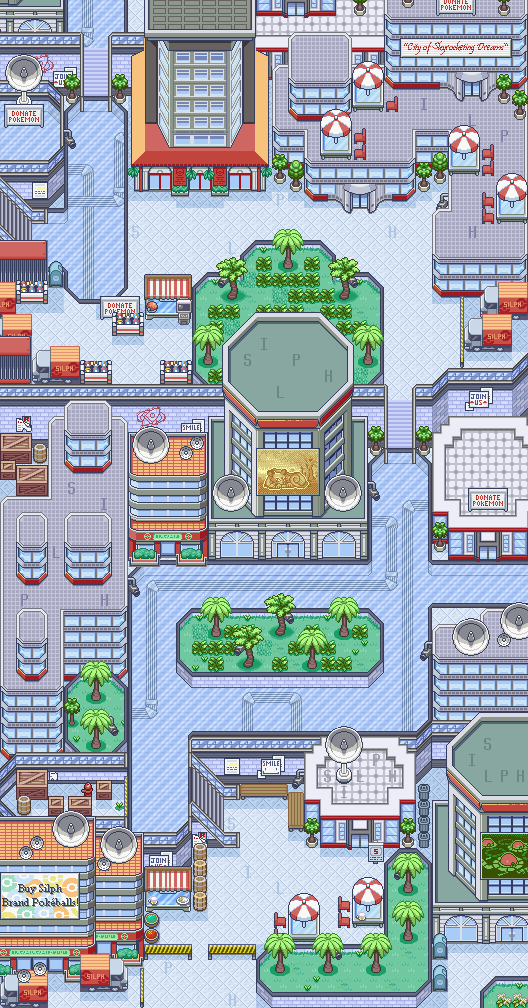 Notes
Welcome to Silph, the City of Skyrocketing Dreams! A newer area in the Kanto Region, Silph sprung up almost overnight. Silph boasts major tech businesses and their factories. Most notable of the bunch is the city's founding investor, Silph Co. Many flock to the city in pursuit of work, in the ever-expanding Pokémon tech industry. Pictured is the town's office hub.

Not only is Silph City a technological powerhouse, the citizens have great charitable spirit. An ongoing program encourages any and every trainer to donate their Pokémon to a powerful cause...

(My attempt at an ominous map while keeping a bright and colourful environment. I also stuffed in as many visual easter eggs as I could. See if you can figure out what's really going on...)

Critique Requested: Sure, thanks!

Notes: PC != NPC, yes? And a small dive area is technically still a map, yes? please don't disqualify me
I wanted to convey the idea of a bottomless abyss that also gazes back at you. The ocean is a scary place!

Critique Requested - Criticism would be appreciated

I made the church and cross tiles.
The rest are recolored, edited, or just straight up gen 3 tiles that came with essentials.
Tileset -

Notes -
I kinda wanted to go for a feel of being in or after some sort of apocalypse. The church building was heavily inspired by the old churches on plains and the old abandoned church on the side of some road near my house. Overall, I had a lot of fun with this and am hoping that I'll be able to noticeably improve over the course of the various trials.

Credits: All by me, with edits to vanilla Crystal tiles

Notes: since I work in Gen 2 style, the tilemap is formatted for pokecrystal, so feel free to rip from the map if it's easier haha

Notes: First time submitting for Iron Mapper! I've always wanted to do one of these

Demoness on the prowl! 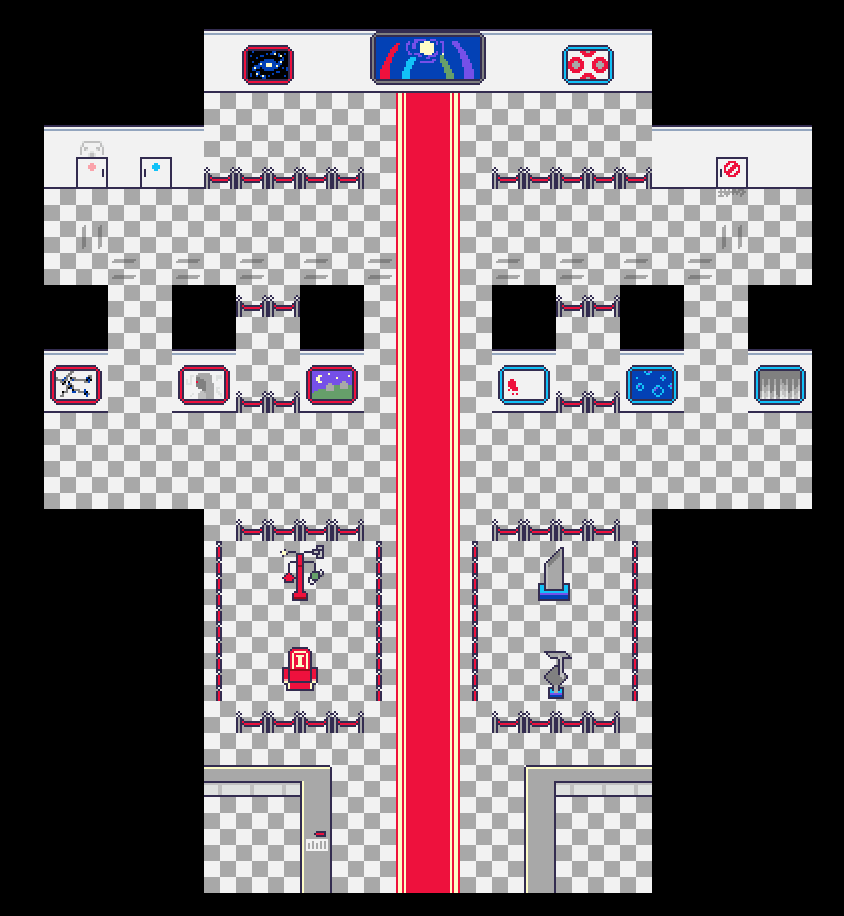 Credits:
All tiles by me.
Source: 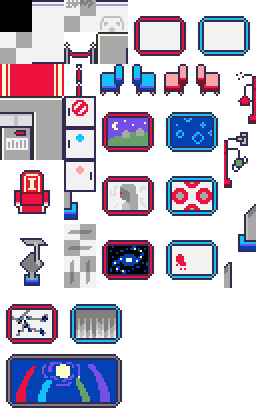 Notes:
Tried to make an ominous, or odd art gallery.
Don't quite know how well I pulled it off.
I have made a discord for my projects:
Discord Link
Twitter

Trial: I: Ominosity
Map Name: After the Storms

Critique Requested: Only if it's about the rules and if I bent them too much somewhere :/

Credits:
Tiles by KingTapir and Magiscarf
with some edits by me but I don't wanna be credited

Notes: Urban search and rescue teams will mark structures with an X symbol but apparently that's just the American style! I learned while making this map that there's at least 1 symbol that's recognized internationally, but I'm not sure if every country has their own accepted symbolism... Anyway that's the cultural explanation for this map; I found the X more familiar and easy to draw even if it's based in a fictional Pokemon region.

Critique Requested: Yes please! I want to make this map spookier in time for Halloween

Credits:
@Voltseon for the amazing tree tiles
@Thundaga for the other, less amazing tiles
Everything else is just the default FRLG tiles!

Notes: This map will be added to Pokémon Splice as part of a Halloween update!
I listened to this song a lot during the mapping process, so that helped lead me in a playfully spooky direction!
Last edited: Oct 17, 2020
My Youtube
My Games

Critique Requested: It would be appreciated

Notes: This is my first time participating, so I'm excited to finally be a part of one of these!
Last edited: Oct 17, 2020 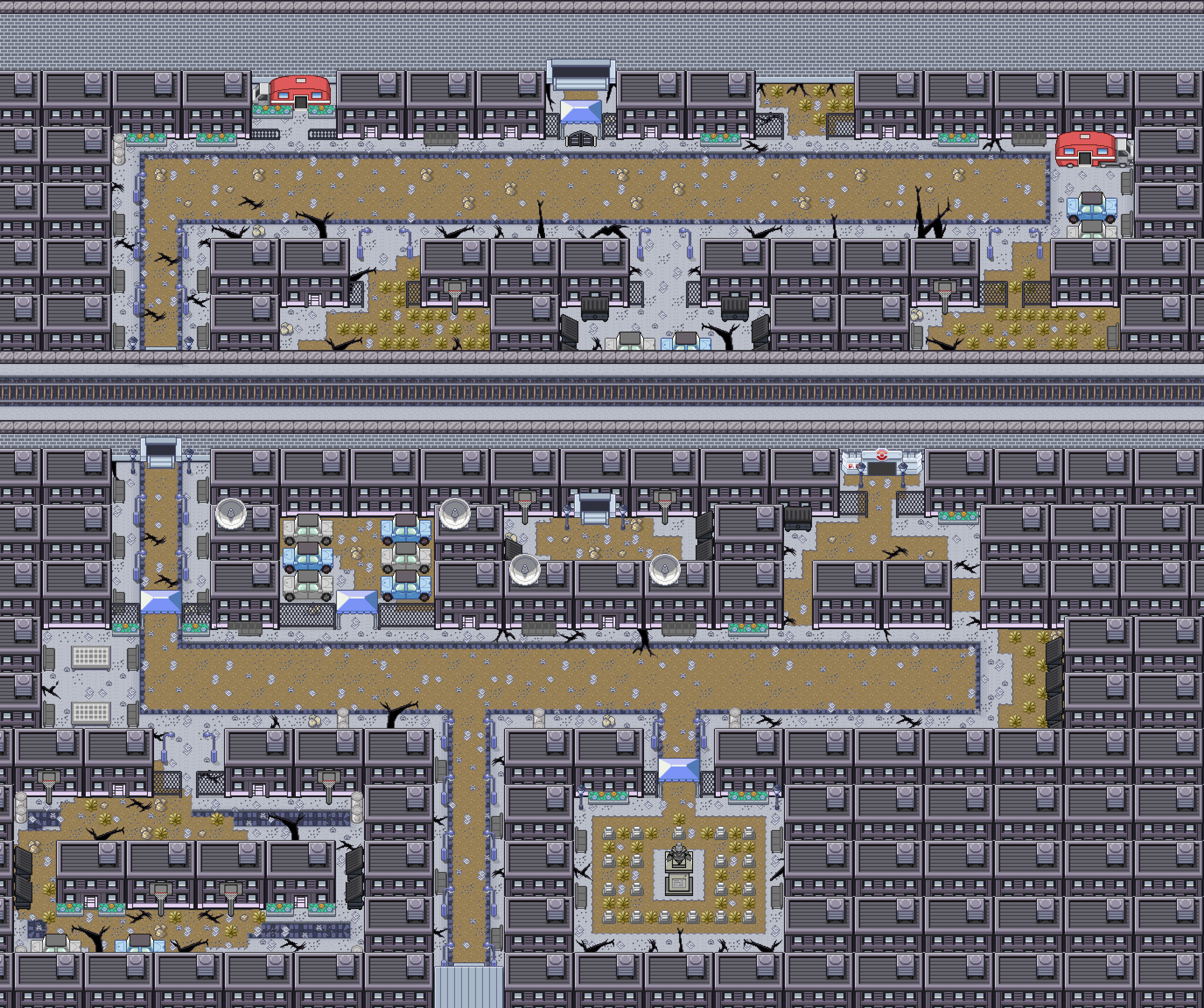 The Reborn Team.
The Rejuvenation Team.
NathenxBrewer.
Morlockhater.
Myself for some small tiles and edits.
Description: Tokara Slums, an abandoned subsection of a bustling metropolis. Originally the first portion of the city to be renovated decades ago, it has since fallen into decay and dereliction. While the rest of the metropolis blossomed and flourished, Tokara Slums has spent its time rotting away; a shell of what it once used to be. A place where happy families and friendly Pokémon once lived together in (relative) harmony is now no more than a ruinous blight on a city that has long forgotten it. Who lives there now? No one knows. They say that if you look hard enough in the city, you can find the entrance to the slum. Many children and visitors have taken a liking to trying to locate the entrance as a fun pastime, but that does raise the question... What secrets does this place possess?

Notes: The map above will (probably) be featured in my game. I like making city maps, and I had to do make one for a specific purpose anyway; so, here we are. I tried to make it look as derelict and dirty as possible to enhance the feeling and ambience of the map. I also decided to include a graveyard where all of the previous residents buried their beloved dead Pokémon. 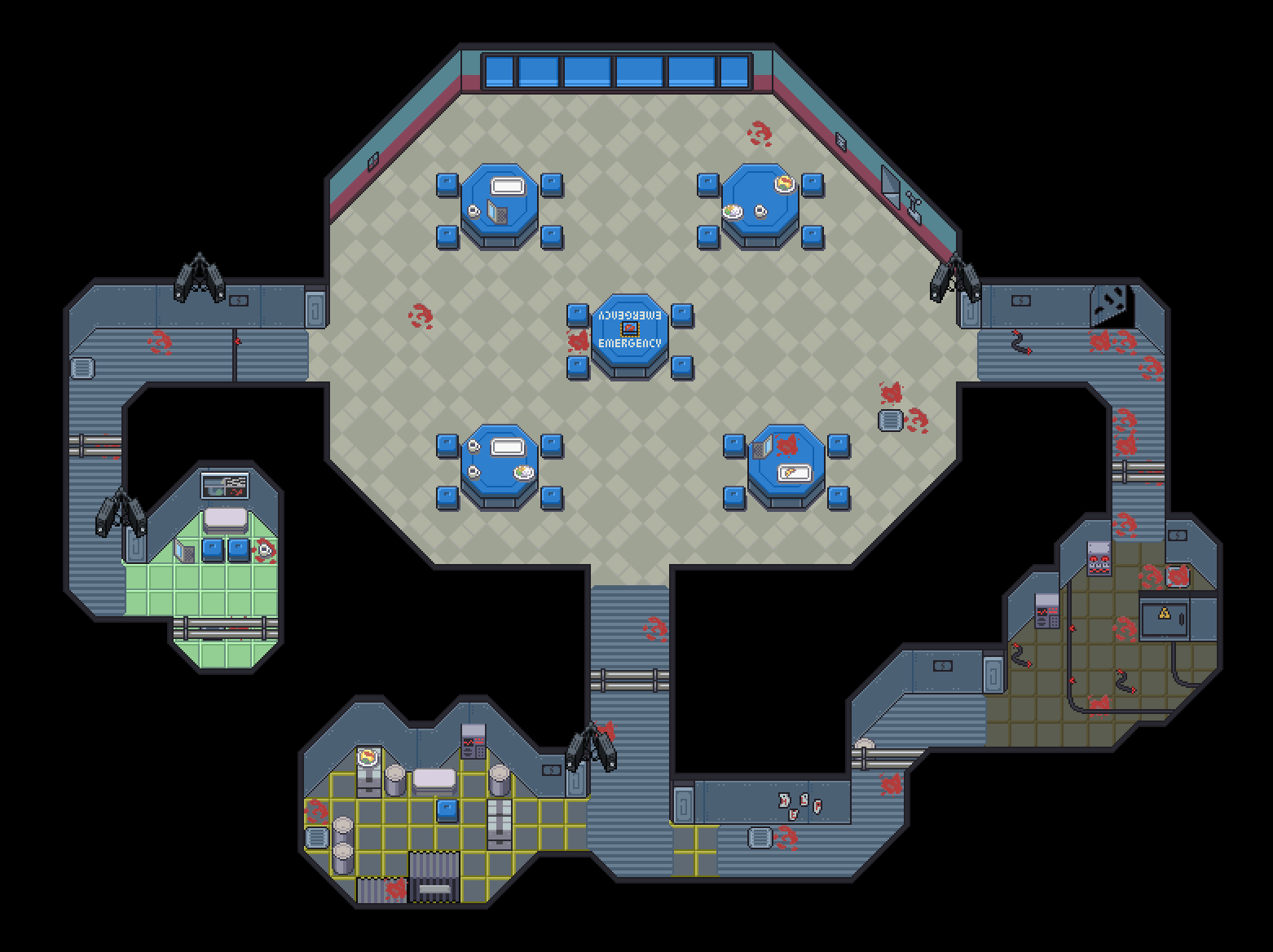 Critique Requested: Sure, why not.

Description: Absolutely nothing is going wrong on your mission through space. It's just ketchup in the Cafeteria, of course. The camera is down due to a completely normal malfunction. Why am I shivering? Why do the hallways have so many twists and turns? Why does it feel like the air is being sucked out... and why have the lights suddenly turned off?

Notes: Yeah, it's the Among Us map. Not the most creative thing, but I thought it would be fun to practice my tile making and indoor mapping. I'm mostly happy with how it turned out though. I think the walls and hallway floors are a little bland but I did do this a tiny bit last-minute. I tried to add my own spin on it with a couple of things, like the piece of the wall ripped open, the changing around of the rooms except the cafeteria, and creating a sort of narrative with the blood. I had fun, so I guess that's all that counts really. [b/]
I brought Ultra Jam into this world.

Credit to @Ekat for the animated signature.

Credits:
Pokemon essentials basic tiles
My brain
Took some inspiration from the mansion at Cinnabar Island.

Somewhere hidden in the Kanto Region is an abandoned Team Rocket Experiment site. It seems that Team Rocket was doing research on different types of Pokemon here, mainly Mewtwo. What kind of research/experiments were they doing on these Pokemon? Why is this site no longer in use by Team Rocket? What's going on in the basement? These kinds of questions are still unanswered to this day. Who will be the one to figure out the mystery?
Last edited: Oct 19, 2020

We were excited to see 17 entries for this long-awaited Iron Mapper trial! Thank you all for your participation, and congratulations with all your outstanding maps! This season will have more trials than season 4, so look out for trial II sometime soon!

With the sheer amount of success of this trial, we've decided on three champions! As always, they are in no particular order.

@Ekat's map provides a unique interpretaion of the theme of "Ominosity", managing to capture an appropriately ominous atmosphere that screams indoctrination with bright and numerous colors!
@Aki's map receives similar praise, managing to tell a more realistic story about the unpredictable side of nature while still leaving the exact cause of the damage up to interpretation!
@Frog wizard's map took a more traditional idea of the theme and managed to truly make it stand out, utilizing unique set pieces to leave the player with much curiosity!