This project has a release available. The full version is still a work in progress.
This game was made for the Relic Castle Game Jam # 6

This game also won a Game Jam Spotlight!!! Thank you all so much for playing!! 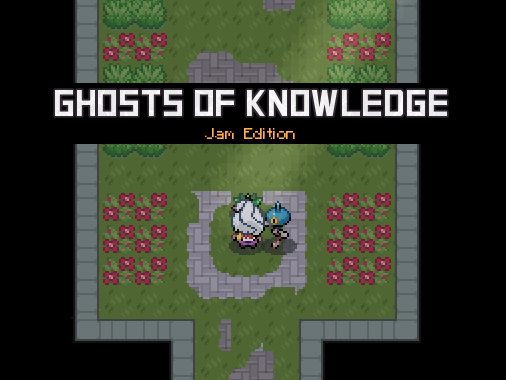 Seasonal explorers Dust and Zee spelunk their way to the bottom of the sea, expecting to find all sorts of relics and treasures of aquatic nature. However, they instead stumble upon a world that has already ended...

Join them in their whimsical and hopefully non-explosive journey through the streets of a former paradise
by collecting treasures and uncovering the secrets behind its remains!

Who knows what happened down there?


- This game runs on the french Pokémon Essentials alternative PSDK which boasts a variety of differences in performance, layout, and form. It also allows me to do unique events! A special thanks to the entire PSDK team for helping me get this product out and pointing out how everything works. This was not possible without Nuri Yuri and Rey, who helped me the most with PSDK engine related things by fixing crashes, bugs, and scripts.​
The Journey!


- Featuring Dust and her lovely Porygon-Z, they'll traverse their way through the labyrinth in search of gold and knowledge in Generation 4 Graphics with Pokémon available up to Generation 8! The story begins with them entering the ruins through an underwater cave, but the region ends up becoming much more complicated to comprehend over as they go on... ​
​
- Lots of strange and impossible events are taking place in this submerged region... How did this all happen, anyway?​
​
- Pokémon that appear in this game are a bit different, some of which are Regional variants unique to the labyrinth! There are tons of balance changes and quality of life fixes that change how some Pokémon are used. Change log here, but beware spoilers: ​
​
All special evolutions of Pokemon in this game have been changed, and experience gain is boosted across the board.
The full details of each MODIFIED evolution in the game is listed below.

​
​
​
- In addition, Experience Points are boosted to reduce grinding, and every Pokémon in this game has a 50% chance to drop a unique item, and a 5% chance to drop a Nugget. I wonder what they're used for in the underground...​
​
- There are currently two endings to the game, and three unique zones to play through, with a run time of roughly 3-5 hours!​
​
Treasures!


- There are special items known as Treasures littered throughout the region. Collecting them places them as a little trophy at the main campsite!​
​
- Treasures aren't just for show, however. Someone might give you something nice for collecting a ton of treasures...​
​
Challenges!


- At each zone, a very powerful foe will appear. Defeating them not only gives you the ability to move on, but choose exactly which area to unlock first... ​
​
Note: (The right door is a bit more difficult as of this Jam release)​
​
- There are more than battles to overcome however... There are places around the region that test your mind rather than your strength!​
​
Secrets!

I hope you all enjoy playing this game as much as I did making it. I worked 40 straight days and nights in the middle of exams and I'm really happy with how a lot of it came out.

Lemme know if something breaks!!


Please keep in mind we were working on a deadline, and therefore a lot of bugs are probably present.

In addition, the battle system for PSDK is extreme work in progress. Everything is functional, but we need to know where the issues are to improve the engine. There is also no possible way I can animate 800 moves in one month, so the animations are just a liiiittle janky. Thank you for considering.

Anyway, were you expecting something self-deprecating?

Yeah, like this is easily my best project yet by a landslide. It even has two endings, but one of them is extremely rushed. I will fix it really soon! Working on this game was a lot of fun, and I will miss Dust and Zee in the coming future. The entire game has a beginning, middle, and end. Despite the content cuts, this is a full experience for once and I'm so happy I got to this point.


That being said, I'm not perfect. I always want to get better. Please report and bugs here, Twitter (@rankoDev) or discord on Relic Castle.

IF YOU PLAYED IT PLEASE TELL ME WHAT YOU THOUGHT AND ANY SUGGESTIONS YOU MAY HAVE!

Will these features come? Maybe... Depends on reception to the original.

I hope this isn't too campy or stuck-up. I really wanted to say something on this end. I legitimately didn't think this game would get this popular, especially against so many high-profile developers and so many beautiful games created for the Jam (I played every single one of them). I, uh, had a lot of conflicting thoughts on this project, so to the many many people that voted on this game as their top 3 favorites, thank you so much. I've been around the scene for a decent amount of time, but always have been scared to release a project. I have lots of scrapped projects. It feels weird knowing people thought about and remembered my game (otherwise, they wouldn't have voted for it).

PSDK is an incredible alternative to Essentials, but the battle system is very experimental. If you see something off, tell me and I will report it. They need feedback to improve it!
​
- There is a pervasive bug with the FollowMe feature that randomly has events follow you when they're not supposed to. Simply exit and reenter a room to fix it. This bug ONLY happens if you save the game before entering specific maps.UPDATE: FIXED in 1.7! LEMME KNOW IF IT HAPPENS STILL.
- Stuff you guys haven't run into yet and I won't know about unless they get reported :)

PSDK would never have happend without Krosk the former creator of Pokémon Script Project which introduced Nuri Yuri to Pokémon Fangame Making in 2008.

I haven't tried the older version of the game because I don't know if its totally different from the last version or is it just removing bugs and buff the mons.

ShinyDarky26 said:
I haven't tried the older version of the game because I don't know if its totally different from the last version or is it just removing bugs and buff the mons.
Click to expand...

It's a very similar version. It only changes a minor change in the end-game and has older PC ui, otherwise it's mostly the same.

May I ask what operating system you run?

Ranko said:
It's a very similar version. It only changes a minor change in the end-game and has older PC ui, otherwise it's mostly the same.

May I ask what operating system you run?
Click to expand...

Try the older version and see if that works. Regardless, there's been a minority of common issues booting up the game so I'll see if I can get that settled soon.

Hi, this black screen issue could be different thing.
Can you tell us what's your computer components and check if you can change the display graphic processor with right click ?

For example in case you don't understand, my current system contains the following:

PSDK runs under GPU 0 since I can't choose.

It could also be interesting to check what the console says when the game boot and you have a black screen. Sometimes where there's an openGL issue, it's stated in the console.
For example, if your GPU doesn't supports shaders (that could be a driver issue) it will state that Shaders are not available.

There's also something you can do, try to copy the lib/LiteRGSS.so file from the previous working version to the new version. This way we will know if that's an issue inside the rendering engine ;)

I am currently using a Lenovo X1 Carbon, Windows 7

God, how can people legally sell computer without graphic card for 1400€ ._.

Can you try to update your intel drivers ?

The Intel® Driver & Support Assistant helps keeps your system up-to-date by detecting when updates are available.